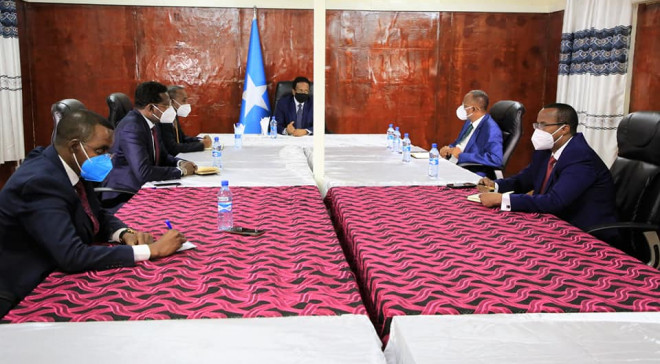 MOGADISHU, Somalia - Talks between the federal government of Somalia and federal states resumed on Sunday at Afisiyooni Center within the airport, a day after both parties failed to agree on the agenda of the meeting, as the country yearns to get a lasting solution on the current electoral impasse.

Members of the international community have been pushing the country's leadership to agree on terms for upcoming elections, but for almost ten months, none of the two wrangling sides is yet to cede grounds for elections to take place.

On Saturday, President Mohamed Abdullahi Farmajo, whose term expired on Feb 8, presided over a meeting with five regional leaders and the governor of Banadir Omar Filish. This was the first time Farmajo met Said Abdullahi Deni of Puntland and Jubaland's Ahmed Islam Mohamed Madobe in two months.

The two Federal States leaders accuse Farmajo of plotting to extend his stay in power by using parliament. They are pushing for the withdrawal of federal troops from Gedo, besides calling for the disbandment of the current electoral committee.

Sources told Garowe Online that the teams failed to agree on the agenda of the meeting, something which might make it difficult for talks to commence. Two regional leaders proposed election security, powers of the term-ended executive and legislative branches up for discussion.

But outgoing President Mohamed Abdullahi Farmaajo insisted implementation of the Sept 17 deal. It's this deal that the international community wants to be implemented, but the government has delayed implementation under unclear circumstances.

Somalia was supposed to go to elections starting from December 2020 but the government has failed to deliver. There is pressure from among the opposition to have the entire government resign to pave way for free and fair elections.