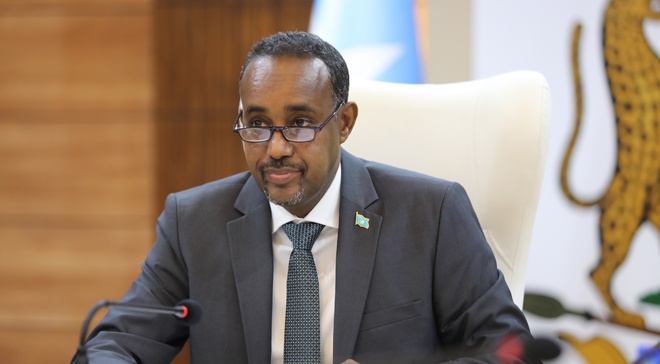 MOGADISHU, Somalia - Somalia's Prime Minister Mohamed Hussein Roble now says the upcoming government will form a strategy that would lead to the permanent elimination of Al-Shabaab militants, who have been wreaking havoc in the Horn of Africa nation for over 14 years, ever since they first launched an attack in 2006.

The statement by the PM comes just a few days after he was sworn in and would now lead the country to the next elections, which are set to start from December this year. The new president will be elected in February 2021, and it's not clear why the PM would wait until the next election to unveil this strategy.

President Mohamed Abdullahi Farmajo is set to face stiff competition from former Presidents Sharif Sheikh Ahmed and Hassan Sheikh Mohamud, who are likely to allow one of them to compete with him, Wadajir party leader Abdirahman Abdishakur Warsane and former Prime Minister Hassan Ali Khaire.

Khaire has been meeting Somalia's stakeholders in Nairobi, which is believed to be his campaign base. The former PM has a cordial working relationship with Jubaland President Ahmed Islam Mohamed Madobe and Puntland President Said Abdullahi Deni, who are critical of Farmajo's administration.

The PM's remarks also come just hours before an attack at Afgoye which targeted members of the Somali National Army [SNA] preliminary reports indicate that at least 18 SNA soldiers were killed on Wednesday night after they were ambushed by the Al-Shabaab militants.

Eyewitnesses said the military officers struggled to contain Al-Shabaab militants who attacked them in large numbers. According to reports, the militants seized the area albeit briefly before disappearing to the nearby bushes where they are believed to be hiding.

Al-Shabaab remains a major threat in the Horn of Africa nation and has killed over 5,000 people mainly civilians and members of the security forces. The SNA, African Union Mission Forces, and the US Africa Command have been leading joint operations against the militants across the country.

US President Donald Trump has informed his top advisers that he wants to withdraw American troops from Somalia, a move that could jeopardize hard-won gains and give Al-Shabaab a chance to make a quick comeback.