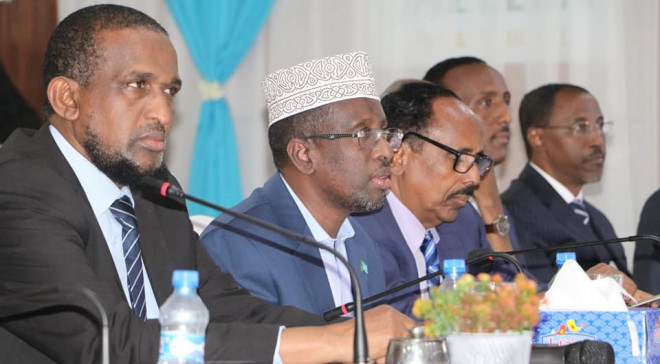 MOGADISHU, Somalia - Somalia President Mohamed Abdullahi Farmajo is now facing a new hurdle after his term came to an end today, just as the country struggles to find a common ground on the upcoming elections, which have been delayed due to disagreements between him and the opposition.

In a tough-worded press statement, the opposition alliance comprising of 14 presidential candidates accused President Mohamed Abdullahi Farmajo of sabotaging the electoral process in his favour, arguing that they will not recognize him after his term lapses today.

Farmajo's four-year term ends today but the country might be in an unprecedented constitutional crisis given that the electoral process has been delayed due to various political challenges, which opposition accuse Farmajo of engineering it.

In the statement, the Council of Presidential Candidates, an umbrella group that unites Somali opposition leaders said they won’t recognize Farmaajo as President effective Feb 8. This comes after the collapse of election talks in Dhusamareb last week where the country leadership was holding a meeting.

The opposition leaders said they reject term extension and are calling for the formation of a “Transitional National Council” comprising of Speakers of the two Houses of Parliament, regional leaders, representatives from the opposition, and civil society, to work on the election timetable.

Elsewhere, Puntland also said they will no longer recognize Farmaajo as the legitimate president of Somalia from Feb 8, in a statement issued by Information Minister Abdullahi Tima-Adde. "We will call him ex-Somali president" since his constitutional mandate expiring tonight.

The country is struggling to solve internal issues that were largely influenced by the decision of President Farmajo to nominate his close allies to the electoral body. Also, the federal government has been accused of failing to withdraw troops from the Gedo region.