Rape and murder of student in Somalia sparks outrage 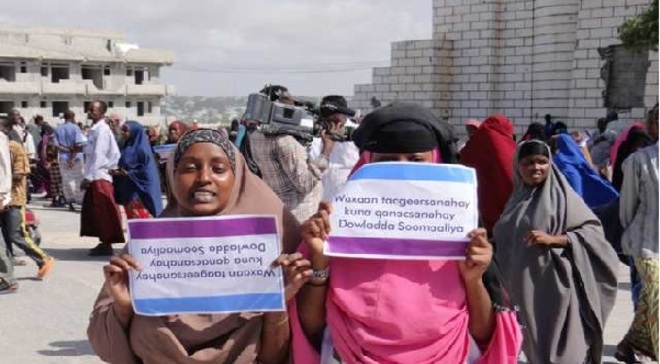 MOGADISHU, Somalia - Hundreds of women thronged into the streets of the Somali capital, Mogadishu, following the death of a teenager who was reportedly gang-raped before being thrown from 6th floor of a storey house building at the Central Business District of the city.

Hamdi Mohamed Farah, a high school graduate girl, died on Friday night following the unfortunate incident which has since attracted retribution from various human rights groups. The groups want perpetrators to be arrested and arraigned in court for prosecution within the shortest time possible.

Angry women gathered along the streets of Makka Al-Mukarama road in Mogadishu and chanted anti-rape slogans, some accusing the government of laziness in handling the cases. The women, mostly dressed in traditional garments, tasked the police to ensure those behind the incident are arrested.

There was traffic snarl within the capital as a number of men also joined them with the protests ending with a tough-worded press conference where they asked security forces to protect civilians from such incidents of rape which target helpless women and children.

Police in Mogadishu confirmed opening an investigation into the reported gang rape and murder of the lady in Waberi district on Friday after arresting several suspects, adding that they had since confirmed that she was thrown off the building. Circumstances behind the incident will be established, they added in a statement.

Security forces in Somalia reported an increase in sexual offenses in the country this year. A number of offenders have executed, jailed, or bring investigated, but there are concerns that all number of cases are handled at the village level where community elders are involved in brokering a truce.

There are no specific laws that handle sexual harassment offenses and this loophole has left victims badly exposed. The country has struggled with instability for over three decades and this has greatly subjected women and children to such a toxic environment.

"How can Somalia tackle rape effectively when the Sexual Offences Bill (2018) drafted with help of civil society is held up in parliament and subject to constant amendments by Islamist and traditionalists MPs?" wondered Rashid Abdi, an analyst on Horn of Africa matters.

Executions have been used as a mode of punishment for those convicted of rape and other sexual offenses. To date, hundreds of women and children have either died after being raped and the international community has often questioned the government's commitment to curbing the crimes.