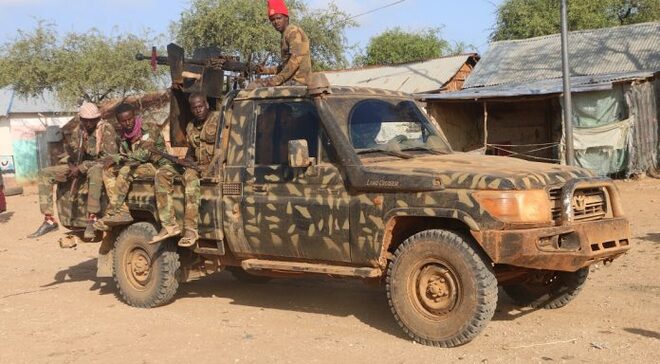 MOGADISHU, Somalia - Two senior Al-Shabaab commanders were on Thursday killed during a joint operation carried out by the Somali National Army [SNA] and international partners, a senior army chief said, adding that those killed had been on security radar for several months, but have been on the run.

The Thursday operation at Middle Jubba also left three other militants critically injured but have been taken in by the military for interrogation over their unscrupulous operations. Middle Jubba is one of the remaining Al-Shabaab strongholds and the Al-Qaeda linked group has been recruiting and training militants in the region.

In fact, it's in Jilib town where the militants have been using as their undisputed headquarters, and security forces are yet to launch successful operations within the region other than persistent airstrikes carried out by the US, which targets infrastructure and specific functions by the Al-Shabaab militants.

Abdulmalik Ma’alin, commander of the SNA’s 16th Unit, said the operation left the two most sought terrorists dead but he did not mention their names. Sources said the two have been coordinating attacks within Middle and Lower Jubba with the help of their team, which comprises of several fighters.

He said that the two commanders had been in charge of security in Middle Jubba adding that those injured were working closely with them. The troops, he added, are pursuing the remaining militants who are said to have fled into the nearby forest where they are now believed to be hiding.

“Two senior Al-Shabab commanders in charge of security of the Middle Juba region were killed and three others injured in an airstrike conducted by the partners. Our forces are now pursuing the remnants who fled to the forest,” Abdumalik told reporters in an interview.

He added: "Our sole mandate is to protect the population from the onslaught and am glad that we are gaining progress. Al-Shabaab does not have a tangible philosophy and they are now trying to incite the population against our people, we must work hard and defeat this team."

But until now, neither African Union Mission troops nor the US Africa Command has confirmed the latest success against the militants. Usually, the AFRICOM team takes time to verify deaths of most wanted terrorists due to bureaucratic procedures that surround the entire process.

Gen. Abdulmalik said the army will maintain operations targeting militant hideouts in the region, where extremists have been hiding in the rural areas and conducting ambushes and planting landmines. He insisted that the militants have lost grounds within the southern part of the country.

Thursday's operation is part of similar raids being carried out across Somalia in a bid to completely degrade Al-Shabaab militants. Since 2008, the group has been fighting to topple the fragile UN-backed Somalia government, which has also been facing internal political wrangles in as many years.