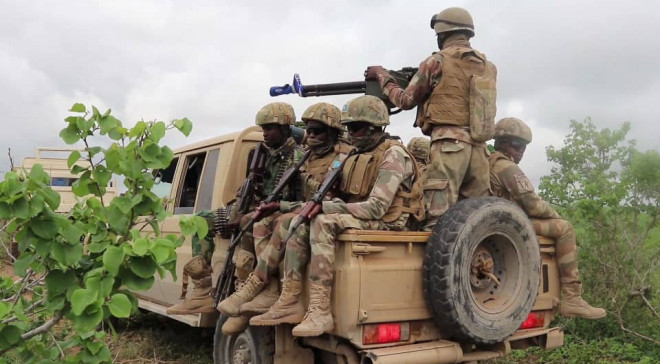 For the past seven months, the Somali National Army has been carrying out operations against Al-Shabaab in various parts of the country, at times working under the command of Chief of Defense Forces Gen Odowaa Yusuf Rage, who is a renowned infantryman in the army.

By last week, the militants suffered huge losses, with over 300 members dying in Middle and Lower Shabelle regions, where they have been running local administrations Hundred of others have also been arrested and are due to appear in the military courts.

And in yet another major victory, the militants lost at least 14 bases to the at on Monday, with the army destroying them during an operation. Several weapons and Improvised Explosive Devices [IEDs] were recovered, state media added.

A number of Al-Shabaab strongholds have been retaken by the military, which is now building a strong local administration ahead of African Union Mission Forces' exit from the country. The African troops will leave by the end of 2021 upon full implementation of the Somali Transition Plan [STP].

But despite the gains, Al-Shabaab managed to retake Marin Gubay in the Bay region of Southwest, following the unprecedented withdrawal of the Ugandan People's Defense Forces [UPDF] who have been guarding the town just in the outskirts of the ancient town of Barawe.

Lower Shabelle governor Abdulkadir Mohamad Nur Sidi told VOA that Somali government forces should have replaced AMISOM, which did not happen. It's not clear why the SNA troops failed to report to the bases in time as scheduled earlier before the UPDF exit.

However, the governor is confident that the operations by the military have yielded fruits in the region, adding that the terror group has been significantly weakened. According to him, the Somali army is ready to take security responsibilities in the country.

"The Governor of Lower Shabelle, Abdikadir Sidi, says that Somali National Army joint operations with AMISOM had weakened the terrorists in the region, making it necessary for Somali Security Forces to take over security responsibilities," state media added.