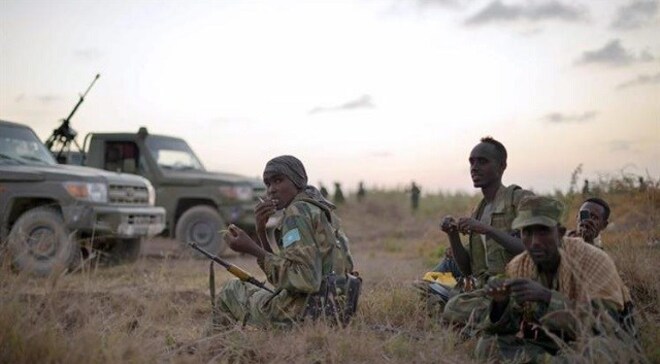 The SNA troops from the 27th battalion engaged the militants in a gunfight at Luqa Jelow which is located in the outskirts of Beledweyne town within Middle Shebelle, a region which is prone to unending Al-Shabaab attacks.

According to General Salah Muse, the fighting lasted for several hours before the militants vanished to thickets, leading to a major liberation of a region in Somalia from Al-Shabaab, which controls large swathes of rural southern and central Somalia.

The troops also managed to free two youths who had been abducted by the militants, with reports indicating that they were being trained and equipped to join the rogue fighters, who have caused chaos and uncertainty in Somalia, a country which has struggled to contain extremism.

"Our troops engaged the militants for some time before overpowering them. We had reinforcement from Djibouti National Army and this significantly boosted us. They were defeated and the town is in our control," he told reporters.

“We freed two young people from their abduction. We suspect that they were being prepared to join the terror group. We thank locals for helping us to trace and inflict defeat on these people," added Salah, who also said that the forces will stay around the town for some time.

The operation, he added, will continue is areas within Middle Shebelle, which has been a battlefield against the militants, adding that the government is keen to liberate all other areas that are still under the control of the militants.

The capture on Tuesday came also hours after African Union forces managed to repulse an attack waged by the Al-Shabaab. The militants had targeted the Beledweyne army base, where they fired several mortar shells.

Official reports indicate that no foreign officer died during the melee. In response, the Djibouti troops opened fire forcing the militants to scamper for safety, but there are reports confirming that a few of them were arrested.

It's not the first time the militants were targeting an AMISOM base. In recent months, there have been increased attacks targeting the heavily fortified Halane Base Camp in Mogadishu, which serves as AMISOM headquarters besides housing several diplomatic missions.

Despite unleashing on security forces, the Al-Shabaab militants have been significantly degraded, forcing them to only attack indiscriminately. The militants cannot wage a successful ground combat operation, US Africa Command said recently.

The SNA troops are currently carrying out operations against the militants across the country. Similar operations in Lower Shebelle and Jubba regions have left hundreds of Al-Shabaab militants dead according to data issued by FGS.

Next year, the SNA troops will fully take over security responsibilities from African Union Mission soldiers, who are set to leave by February. There are close to 22,000 AU troops in Somalia with an additional 500 troops from the US.