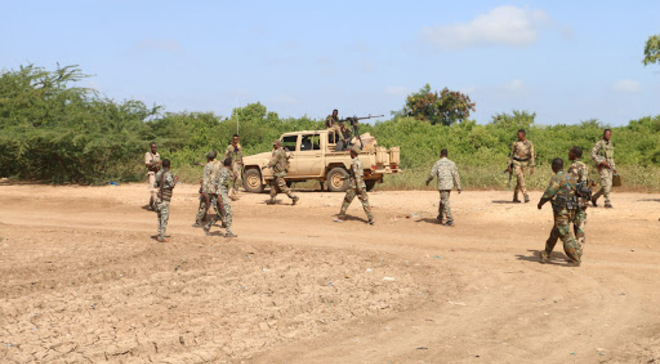 MOGADISHU, Somalia - The Somali National Army [SNA] recaptured a strategic town located about 60 KM West of Kismayo on Saturday, in yet another tremendous success against the Somalia-based militants, who have been wreaking havoc in the Horn of Africa nation for over a decade

Senior military officials told state media that the troops liberated Jana Abdalle town in Jubaland almost two years after it was taken by the militants. The troops are carrying out operations across the country in a bid to flash out the Al-Shabaab militants.

The officials said several Al-Shabaab fighters were killed during the deadly encounter as others got arrested alive. Those who were captured will be taken into military court for trial after which sentencing will take place, officials added.

According to the officials, the terror group used to controlled human and motorized traffic at the area, turning it into a toll station and a prime source of funds for terrorism activities. Some of these funds are used in paying fighters besides helping in recruitment.

However, the officers did not reveal the number of fighters who were injured during the fight. But according to reports, none of the elite SNA soldiers who got injured or killed during the operation, which was among the few to be conducted by the Somali army alone.

Reports also intimate Al-Shabaab militants destroyed a water-well and buried landmines into the area zone, but the forces removed out the unexploded bombs this morning successfully, a significant move that would avert more unprecedented deaths.

Alshabab militants who are linked to Al-Qaeda are fighting in Somalia to overthrow the internationally recognized central government to establish harsh Sharia law understood in their own interpretation and controls vast swathes of rural southern and central Somalia.

Alshabab has been fighting in Somalia since 2008 and has been chased away from Mogadishu but the militants hold large swathes of territory and frequently conducts car bombs and gun attacks in Mogadishu and elsewhere in the long-chaotic Horn of Africa nation.

So far, several towns have been captured from the militants, something which has helped to restore order in the country. Key among the towns in Jubaland which have been liberated include Kismayo, which was a commercial city for the militants, Bilis Qooqani, Dhobley, and Afmadow.

From next year, the Somali National Army will take over security responsibilities from the Africa Union Mission troops who have been in the country for almost a decade. The international community has been supporting efforts to restore normalcy in Somalia.