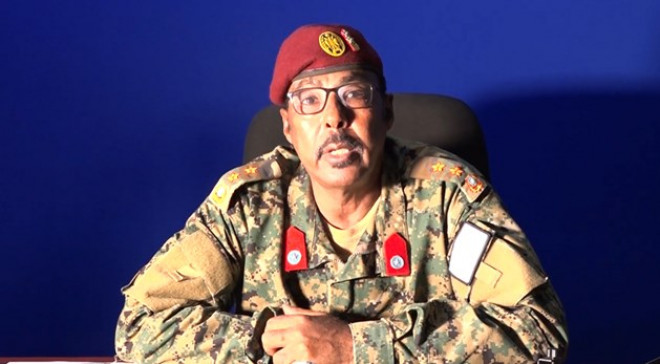 MOGADISHU, Somalia - In a rare operation, the Somali National Army [SNA] launched a mortar shelling in Middle Shabelle on Tuesday as part of the ongoing operation to flush Al-Shabaab militants in the country, after decades of wreaking havoc on innocent civilians and government officials.

To seize security functions in the country, the national army has heightened operations against Al-Shabaab in the Middle and Lower Shabelle regions, confiscating sophisticated weapons besides crushing Al-Shabaab bases.

And on Tuesday, the team launched a bombardment that left about 17 militants dead, Col Ali Hashi, who is the SNA spokesman said, adding that the operation will continue for the remaining months in 2021 before the troops take over security responsibilities from AMISOM forces.

"We managed to bomb Al-Shabaab bases in Ali Fooldhere and Warahley where close to 17 Al-Shabaab militants died," he said, noting that the operation in the said region kicked off officially on Monday, and will go on for the rest of the coming weeks.

He added: "It's a rare airstrike and I can confirm that no civilians were killed or injured during the operation. We thank the people for continuing to work closely with us purposely to defeat these criminals who have little consciousness on life and property."

However, the spokesperson noted, a number of residents were displaced after SNA bombarded Ali Foldhere and Qurac Madobe villages. The SNA troops are known for their infantry skills and often depend on AMISOM and US Africa Command for aerial surveillance.

This comes after the troops managed to destroy close to 14 bases in Middle Shabelle which were occupied by Al-Shabaab on Monday, seizing a number of weapons and explosives. The SNA chief of staff General Odowaa Yusuf Rageh has often been taking part in the operations.

But in Lower Shabelle, the troops failed to arrive in time at a village near the ancient town of Barawe, giving Al-Shabaab a chance to take over. Area Governor Mohamed Nur said the AU forces had left the Forward Operating Base for other supply routes where Al-Shabaab has been antagonizing people.

Operations against the militants seem to be constant and well-strategized given the frequent outing by the military. On Tuesday, at least three Al-Shabaab operatives were captured near Mogadishu as part of the strategy to vanquish the group.

"Somali Police Special Unit Haramcad captured 3 Al-Shabab members and their vehicle on Tuesday evening after attempting to attack the checkpoint of security forces guarding the construction of the road between Mogadishu and Afgoye," state media reported.

For the last three months, at least 300 Al-Shabaab militants have been killed in various parts of the country with the group now controlling small sections of the country. Al-Shabaab has been fighting to topple the fragile UN-backed Somalia administration.