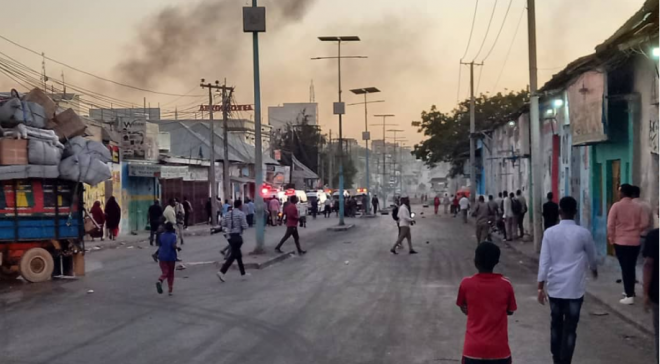 MOGADISHU, Somalia - Security forces drawn from different departments have successfully ended the siege at Afric Hotel in Mogadishu, which came under attack from Al-Shabaab militants, who stormed at it around 5 pm local time, catching guards off guard.

Col Sadik Dodishe, the spokesperson of the police, said security forces managed to kill four Al-Shabaab militants who had stormed the hotel, disrupting peace for several hours. The names of the militants could not be established at the time, but they were all confirmed dead.

The attack, Dodishe said, left five civilians dead and scores injured, in what becomes one of the deadly attacks this year within the capital, Mogadishu. Among those killed was General Mohamed Galal, a former operative within the regime of Siad Barre.

"There is normalcy now within the capital city," he said, adding that: "Our security forces managed to kill the four attackers who raided the hotel. There is calm and people should go on with their lives are we investigate the attack and being more culprits into the book."

Eyewitnesses said that the attackers first detonated a bomb outside the hotel before storming inside as they fired indiscriminately. Security forces responded in time and managed to rescue tens of people who were within the premises.

Authorities said that there was a meeting involving senior government officials that were taking place at the time of the attack. The Al-Shabaab militants, who have been causing havoc in the country, claimed responsibility for the attack but did not immediately reveal their target.

Prime Minister Mohamed Hussein Roble sent condolences to the affected families and asked the people to work closely in a bid to end terrorism in the country. He condemned the militants for causing mayhem in the country which has struggled with instability for five decades.

"My heartfelt condolences to the families of the victims of the heinous terror attack in Hotel Afrik including Gen Mohamed Nur Galal who served his country with valor for over 50 years. This attack is yet another reminder of the savage enemy we face. We must unite against terror," he noted.