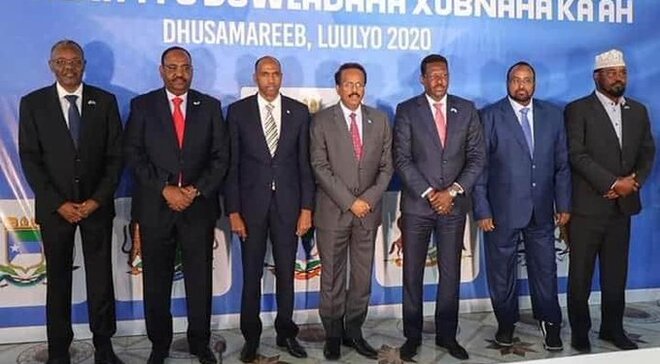 President Mohamed Abdullahi Farmajo and Prime Minister Hassan Ali Khaire reached the decision after meeting regional leaders from the five federal states, and the communique was issued with all leaders, who took photos after the session, which could define the destiny of Somalia.

According to the communique, the Somali leaders insisted that the country will hold timely elections in compliance with constitutional obligations, adding that the outcome must be "credible" and "verifiable" which satisfies all stakeholders and the electorates.

"The leaders agreed to hold credible and timely elections in Somalia," Abdinur Mohamed, the Director of Communications in Villa Somalia said, adding that: "They also agreed to nominate a joint technical working committee that would later table recommendations concerning elections."

It is not clear who will be incorporated into the committee but regional leaders and the federal government will issue their preferred allies for the meeting. After two weeks, the committee will table the recommendations during the second conference in Dhusamareb, he added.

The committee, Somali leaders said, will discuss the compromise electoral model which would pave way for timely elections, which should take place after the expiry of the term for the current administration in November. Tentatively, parliamentary elections are supposed to be held in December with presidential elections expected before February 2021.

"The team shall reconvene in Dhusamareb in two weeks' time to complete the country's electoral processes," added Abdinur Mohamed, a fierce defender of Farmajo, who has often scolded those questioning the current regime.

Last month, the NIEC rules out timely elections arguing that the country can afford the one-person-one-vote earliest in March 2021, adding that should Somalis push for biometric voter registration, the commission would need the addition of five months to fulfill its mandate.

The international community and President Farmajo have been championing for a universal suffrage model of elections, but the federal states leadership and the opposition view it as a recipe for term extensions. The current administration came into power in 2017 for a 4-year tenure.

In his speech, Farmajo denied plans to extend his term, adding that he's never been interested to influence the electoral model for the country. His primary obligation, Farmajo said, is to fulfill the constitutional mandate besides leaving behind a good legacy.

"I've never tried to influence the election model or communicate with any Electoral official. I fulfilled my constitutional mandate when I received the passed bill. I have never had any preferred model. All I want is to leave a legacy of democracy and stability," he said.

The agreement now tasks the technical committee to find out the best model besides ruling out the universal suffrage which had been preferred by international stakeholders. Partly, the agreement is a big victory for regional leaders who have been keen to have elections held in time.

Traditionally, Somalia has been preferring to hold elections using the 4.5 electoral model which is purely clan-based. But Heritage Institute of Policy Studies, a Mogadishu-based think tank, has recommended an expanded model, which would see more electors brought on board.

Abdirashid Hashi, the director of the institute, said the model would have at least 221,000 people participating in the election contrary to 14,025 in the clan-based model. According to him, the model is "simple and inclusive" should stakeholders decide to implement it.

Besides the thorny electoral model, the leaders also agreed to strengthen unity by ensuring close cooperation between FGS and FMS. Further, they said, terrorism and development would be among key agendas as they strive to strengthen the country's weak institutions.

"They agreed to strengthen unity and solidarity for the citizens and the federal republic of Somalia besides enhancing FGS-FMS cooperation to sustain stability and fight terrorism. Also, they'll boost economic development efforts to intensify the debt relief process in Somalia," Abdinur added.

Somalia's future now lies on the technical committee but the decision to hold elections in time would erode suspicions and anxiety from among the country's top leadership. Galmadug President Ahmed Kariye alias Qoor Qoor would host the second conference in a fortnight.