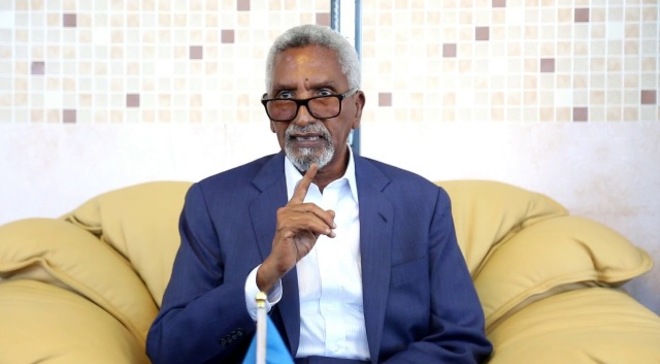 MOGADISHU, Somalia - A storm is brewing in Somalia's parliament following the approval of the Public Finance Act by the Lower House without involving the Senate, details have emerged, even after the legislation got final node from President Mohamed Abdullahi Farmajo.

The PFM Act was significantly amended by the Lower House, stripping off the Senate powers to review the legislation in line with the provisional constitution. The approval now means the Senate does not have any role to play in the national budget-making process and accountability.

Senate Speaker Abdi Hashi has already filed a protest letter to President Mohamed Abdullahi Farmajo, the chairman of the High Court and other senior state officers, arguing that the PFM act was not approved by the Upper House, adding that it should be ignored or disregarded since it's "unconstitutional".

Hashi notes that the president was misled by state bureaucrats in assenting to the bill, adding that the process was flawed and illegitimate. The bicameral house has been at loggerheads for long spells over supremacy battles, a move which has stagnated legislation making in Somalia.

Last year, a meeting between the leadership of the two houses toned down the differences with the agreement that the budget process will be inclusive of both chambers. The Lower House leans towards President Mohamed Abdullahi Farmajo and he's been under pressure for "misusing" MPs to achieve certain political agendas.

Article 82 and 83 of the Provisional Constitution provides clarity on roles by both Houses in regards to draft laws. Somalia Senate accuses the Lower House of mutilating its amended version of the Bill and sending it to the president for assent contrary to procedure.

According to Sub-article 4, the Lower House has two options when it receives an amended draft law from the Senate. One of the options is to accept the changes and submit the law to the president for assent, making the bill automatically a law.

But if not contended, the Lower House can reject and overrule the Senate’s decision with a two-thirds majority vote of the total membership of the house (275) and subsequently transmit it to the president for assent.

However, in his letter dated August 1, Senate Speaker Hashi laments his opposite in the Lower House offended the constitution and went ahead to submit the law for assent. And a read through the 27 articles which the Senate says the Lower House amended without notification outlines a deliberate move by the Lower House to universally arrogate itself powers in the budget process, oversight, and accountability.

Under the federal constitution, the Senate is created for the purposes of among others, acting as the guarantor of the Federal Member States and protecting the federalism project. It, therefore, follows the Senate, without doubt, must be involved in the budget process since it involves the interests of the FMS.

In effect, therefore, the PFMA which was hailed by among others the international community as critical in the prudent management of public finance largely leaves out the oversight role of the Senate of public institutions including on critical budget-making decisions.

The two houses are also at loggerheads over approval of the electoral legislation, a move which has almost plunged the country into chaos. The country's leadership will be meeting from August 15 in Dhusamareb, the regional administrative capital of Galmadug, where it will solve the impasse.