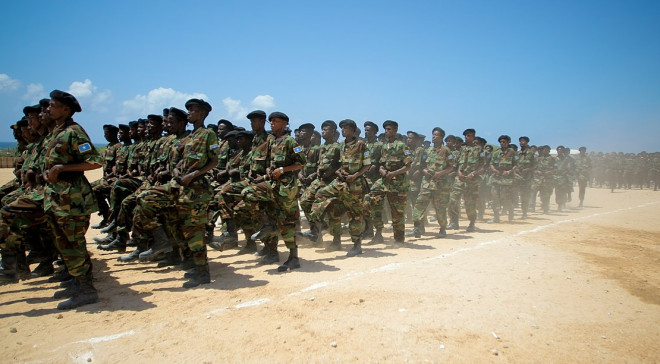 MOGADISHU, Somalia - Thousands of Somali soldiers training in Eritrea have completed their training, two years after recruitment, a highly placed source has confirmed, but they have since been subjected to "slavery" by their hosts and are being treated "inhumanly".

In an interview with Voice of America, Somali, one of the soldiers narrates their experience in Eritrea, giving a clue on what might be happening to them, even as the Somali government remains tight-lipped on their plight and future in the military.

Speaking in anonymity, the trainee describes their living conditions as harsh and miserable. "We are treated inhumanely, sometimes we work in farming fields," he notes, in what could further ignite tough debate on their deployment to Eritrea.

According to him, they have since completed their two-year training in Eritrea but have been constantly subjected to "slavery" and "cruel" punishment with their future almost remaining uncertain. It's estimated that they are close to 5,000 and reported in three batches.

Some, he claimed, have since died due to inhumane treatment they were subjected to but didn't give an exact number of those who may have lost their lives. A number of them, he added, are suffering from injuries inflicted on them by their hosts in Eritrea.

"We completed military training in September but ever since we are in slavery and constantly subjected to cruel punishment until some of us died from injuries inflicted upon," he told the Voice of America, Somali.

Interestingly, he neither confirmed nor denied the participation of some of them in the Tigray war, which has left thousands dead. A report by the UN special rapporteur to Eritrea confirmed that a number of Somali soldiers were sneaked from Asmara to the Tigray region where they participated in the mass murder of locals.

But the Somali government has persistently denied claims despite confirming that indeed there are troops training in Eritrea. "In many countries, politicians avoid discussing bilateral Defense and Security matters or issues touching on forces because it is deemed a Supreme national secret," information minister Osman Abukar Dubbe said.

"Unfortunately, our Somali politicians have made the politicization of our forces a hobby which is dangerous," he added, even as parents to the youths continue to seek answers from the government over the whereabouts of the trainee soldiers.

Investigations done by The Garowe Online established that outgoing President Mohamed Abdullahi Farmajo, National Intelligence Security Agency [NISA] boss Fahad Yasin, and two others coordinated the clandestine recruitment in 2019. It's believed that Farmajo is keen to use the troops to continue clinging in power.

Samira Gaid, a former security advisor to the Office of the Prime Minister, exonerated former Prime Minister Hassan Ali Khaire, arguing that he was too kept in darkness when the recruitment was done. She also questions the mode of recruitment.

"If troops wanted to be trained abroad, there must be an agreement between the two countries, so there was no pact that the government has signed," she said in an interview with the Voice of America, Somali section.

"If I give you an example, we sent soldiers to Turkey for training following an agreement signed in 2018 by ex-defense minister, who is currently the house speaker Mohamed Mursal, and the cabinet passed it," she said adding: " and the UK is now training Somali soldiers in Baidoa under a deal."

Each agreement is submitted to the cabinet for ratification and approval, thus the decision that the soldiers were sent to Eritrea didn’t pass through the cabinet and the PM’s office, she noted, in what further implicates the regime of Mohamed Abdullahi Farmajo.

As of now, it's difficult to obtain full information on the recruitment, even the exact number of those taken to Eritrea, given that most of the reports are kept by the spy agency, whose leadership is closely linked with operations at Villa Somalia.

The information comes even as Eritrea files another complaint against United Nations Security Council and UN heads of humanitarian agencies over the situation in the conflict-hir Tigray region of Ethiopia, Africa Times reports.

The Eritrean mission and U.N. Ambassador Sophia Tesfamariam expressed frustration that representatives for the nation were not included in their Tuesday meeting on the humanitarian crisis in Tigray, leaving Eritrea no opportunity to counter serious claims made against it.