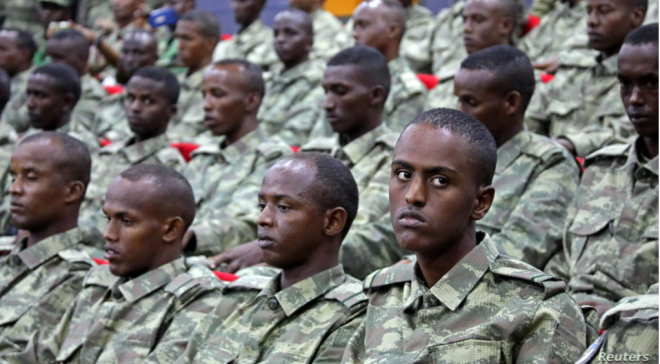 FILE - Somali soldiers attend a training session at a Turkish military base in Mogadishu, Somalia, Sept. 30, 2017.

MOGADISHU, Somalia - Thousands of Somali soldiers training in Eritrea are set to return back to home, The Investigative Dossier has established, amid concerns from different stakeholders on their whereabouts, something which has triggered political conflict in the country.

Previous investigations done by the Garowe Online established that the soldiers had been misled on the trip, with authorities in government saying they were set to train in Qatar. The top masterminds of the clandestine recruitment were spy chief Fahad Yasin and outgoing President Mohamed Abdullahi Farmaajo.

The team left in three batches at Adan Adde International Airport for Asmara but top airport officials were also kept in darkness. Various corroborating information shows that the soldiers were about 5,000 and their training was set to help Farmaajo stay in power a little longer.

With their parents and the opposition questioning their whereabouts, the government, which admitted to taking them to Eritrea in 2019, was skeptical of giving further information, arguing that the issues in the limelight were a matter of national security.

But the Investigative Dossier has now revealed that there are plans to have them home within weeks, but a definite time frame hasn't been established. They have trained in Asmara for two years now.

A team from Eritrea is currently in Somalia to assess the area of deployment along with Somali security experts, according to two government sources. The team is keen to have a safe landing for the troops before they resume national duties.

The government, Investigative Dossier added, has a tentative plan to have the soldiers operate in Southwest and Jubaland states. Eritrea is equipping them according to sources, following a deal between President Mohamed Abdullahi Farmaajo and Isaias Afwerki.

Further, the two government officials said the soldiers who were mainly trained as mobile forces, have received the toughest training of all the Somali soldiers. They will be incorporated into the Somali National Army [SNA].

Confirmed reports indicate the soldiers are mainly in three camps with all of them totaling 5,167. The first camp has 1,500, the second camp has 900 while the third camp, which is the largest unit, comprises 2,767 trainees.

Deserters from the three camps say they are not aware of Somali soldiers taken to Tigray. Recent UN report citing “reports” and “information” reported the opposite, arguing that the Somali troops training in Eritrea crossed over to Ethiopia where they fought in the Tigray war.

The UN report was corroborated by the Tigray Defense Forces [TDF], which was battling against Ethiopia National Defense Forces [ENDF], Eritrea troops, and the Amhara regional forces. TDF claimed it had taken a number of them into prison and, or killed quite a number.

The number of deserters from Somali soldiers is increasing. Some arrived before as displayed by Puntland. They said they completed training months ago, didn’t know the reason for their continued stay in Eritrea, the reason that led to their departure.

The soldiers described tough training, lack of nutritious foods, medical care. There were incidents in which some soldiers died. Three deserters mentioned confrontation with Eritrean trainers; scuffles led to the shooting.

Deserters say 7 died, a govt official says only one soldier died. The government has, however, been silent on the matter following pressure back home mainly from opposition leaders led by former Presidents Sharif Sheikh Ahmed and Hassan Sheikh Mohamud.

The impending homecoming of the soldiers comes at the time Somalia is going for elections. The presidential polls have been scheduled for October 10, and the incumbent President Mohamed Abdullahi Farmaajo, whose term expired in February, has insisted on defending the seat.