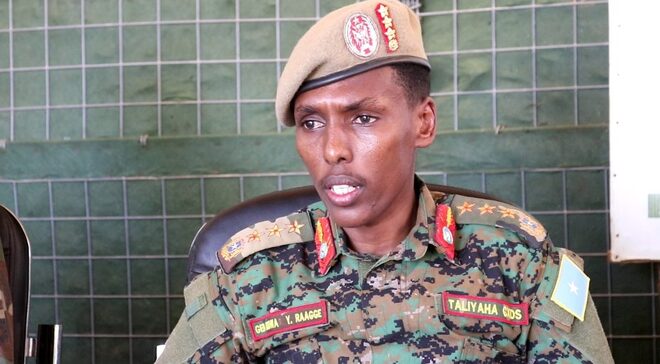 MOGADISHU, Somalia - A top Al-Shabaab operative was killed by Somali military in the notorious Lower Shebelle region, army chief General Yusuf Rageh announced on Sunday, in what is said to be a significant achievement in the fight against the Al-Qaeda linked group which controls large swathes of rural southern and central Somalia.

General Rageh, one of the most feared soldiers picked from among the Infantry Corps, said the troops conducted a sophisticated operation in Lower Shebelle where they killed Osman Gaab, an Al-Shabaab commander who has been on the radar for several years now. The militant was in charge of three towns within the region.

The army chief, who was elevated to the rank at just the age of 32, accused the militant of leading attacks against government troops, senior officials, foreigners, and people believed to be close associates of the government in recent years. In the process, he added, hundreds have been killed.

Osman, the military chief added, has also been subjecting locals to harsh penalties including the imposition of taxes that are used to finance Al-Shabaab operations across the country. The taxes, he said, are also used to finance the training of young fighters mainly recruited from local areas in Somalia.

"He had been on the run and we thank God for helping us to deal with him. We managed to kill him and this is a significant achievement for us. He has been coordinating attacks against security forces and innocent people in Lower Shebelle and luckily, he's no more," said Rageh in a rare message to the media.

He added: "From their unscrupulous activities, they have been raising finances and this helps even in training of young innocent people to the group. We're pursuing other fighters and I have confidence in our soldiers. They will continue to execute these operations across Somalia."

The military chief hailed the local community for helping soldiers to trace those causing mayhem within East Africa. According to him, Al-Shabaab will continue to remain a threat to the country should locals fail to cooperate with gallant security forces who have been conducting operations.

In the history of Somalia, this is the first time a senior army officer was reporting the death of a militant. Previously, such successes were coming from unit commanders or the Africa Union Mission troops in Somalia, who work closely with SNA soldiers in a bid to rescue the country from the militants.

The death of the notorious commander came few hours after Al-Shabaab attacked April 12 army base in Mogadishu, killing at least eight soldiers. This was the second successful assault on SNA base this year after the deadly January attack at the El-Salini military base in Lower Shebelle.

Also, the Danab forces had seized Lafaha-Raga highway which runs from the strategic port of Kismayo after hours of an intensive gunfight with the Al-Shabaab militants on Thursday. The highway has been under the militants for several years now before Danab's special operation on Thursday.

Gen. Ismail Abdimalik, the Commander 16th Unit for Danaab, said the operation left at least six militants dead. The operation, he added, lasted for several hours before a section of militants fled off after being completely subdued by the special forces, who eventually seized the highway.

He said that the victory will open the southern part of the country after years of Al-Shabaab control. No Danaab soldier was injured or killed during the incident, the general said, adding that the troops will continue fumigating the country until stability is attained.

"It is one of the incidents that has yet again made us proud," the general said, adding that, "our troops fought with dignity to rescue the area from the militants. We've finally taken over the area and the troops will be around for some time until normalcy is restored".

Al-Shabaab remains a major impedance to Somalia's quest for peace and stability despite concerted effort to vanquish the team.

The US Africa Command and the AMISOM troops have been instrumental in the fight against Al-Shabaab, and several positives have been recorded this year, including seizing of the strategic town of Janaale in Lower Shebelle.