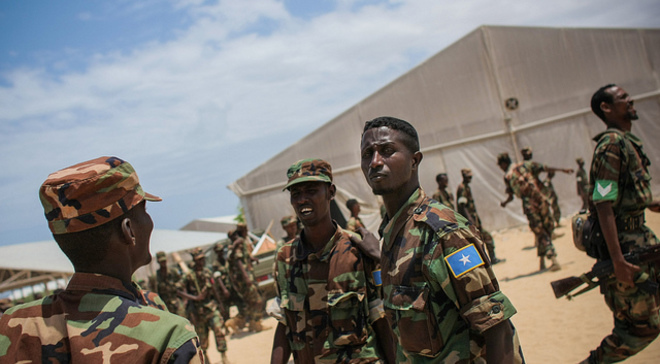 With the aid of the AU forces and the US military, special forces from SNA raided the agricultural-rich town in southern Somalia a fortnight ago, consequently, liberating it from the Al-Qaeda linked group.

For a decade, the town had played a key role including generation of income for the militants through Zakat, besides being used to "administer" justice to those opposed to Al-Shabaab's illegal operations, officials said.

But after years of planning and surveillance, the government troops managed to take over the town, during a confrontation that lasted for a few hours according to reports by SNA radio.

Abdelhamid Mohamed, the lead commander in the operation, said "we managed to inflict massive casualties on their besides wounding and capturing quite a number of them" during his interview with reporters.

Since Mar. 16, over 142 Al-Shabaab militants have been killed, 29 seriously wounded and 18 captured alive, the commander said in the interview, adding that "no SNA troops died" during the most recent success against Al-Shabaab.

In a statement after the capture of Janaale town, the US Africa Command announced that two airstrikes had been conducted during the raid, leaving at least 15 militants dead. A week prior to the crackdown, twin airstrikes had killed nine terrorists, it added.

While acknowledging the loss of Janaale, Al-Shabaab however, claimed that a retaliatory attack from its troops had left seven SNA soldiers dead and dozens injured, although the reports could not be established.

Southern and central Somalia has been used as recruitment and training cells for the Al-Shabaab militants, but the group is substantially losing grip due to limited finances and frequent US airstrikes accompanied with tough ground combats, an intelligence report revealed.

During the operation, one of those seized alive was Ibrahim Mohamed Rooble, a key operative who was in charge of tax collection and intelligence within the region, officials reported.

Significantly, the capture of Ibrahim Mohamed Rooble comes barely three days after SNA reported seizing of three other top commanders last week at Janaale, a town whose liberation was the hallmark of military operations in Somalia.

Hassan Suleyt alias Hassan Ganey was arrested and bundled into the military tracks and is due to be interrogated to give a synopsis of Al-Shabaab operations, Abdihamid Mohamed had said.

He had been arrested along with two others, with one identified as Mohamud Yussuf Mansur, who until his apprehension, was the head of explosives brigade in Lower Shebelle. Suleyt was in charge of Amniyat in the region, officials said.

SNA operations have been intensified, with the most recent coming just on Saturday at Bariire town in Lower Shebelle, where four militants were killed before launching a "hit and run" attack, police said.

Also, another attack at Buulo Fuluay in the Bay region left quite a number of militants dead last week, as the group struggles to reorganize itself following total disintegration orchestrated by the military.

Janaale town is set to have a civilian administration for the first time in a decade, which will work closely with FGS to deliver services to the residents, Prime Minister Hassan Ali Khaire said in a statement.

SNA troops are set to fully assume security assignments in Somalia once AF forces [AMISOM] complete it's mandated next year. There are close to 22,000 AMISOM troops in Somalia.