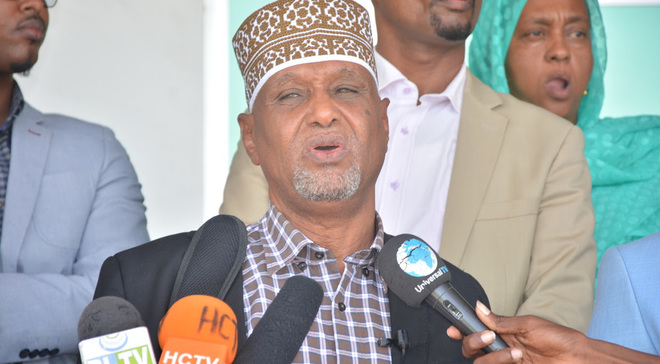 GAROWE, Puntland - The Minister of Constitutional Affairs of the Federal Government of Somalia, Abdi Hosh Jibril has been blamed for hijacking the role of constitutional review bodies, Garowe Online reports.

In an exclusive interview with GO, Federal MP Mohamed Abdullahi Kamil who is the deputy chair of the joint Parliamentary Constitutional Review Committee said Hosh is misleading the process and conducting constitutional review activities unilaterally.

Kamil has also accused the Minister of power abuse and offences against members of the Constitutional Review Committees in making censorship and edit in their recent statement on the Somali National Television, SNTV.

"The Minister is responsible for the current challenges and is waging war against the joint Constitutional review committees on the media after they have spoken about his mistakes," said Kamil during the Interview.

The lawmaker noted that they are dissatisfied with the Minister's unproductive and unilateral work in the Constitutional review he is reluctant to continue collaboration and consultation with the joint Parliamentary Constitutional Review Committee.

"I swear in the name of Allah, we are unhappy with the Ministry's unlawful work," said the MP.

Continuing, the legislator has disclosed disagreements between the two parties that had been resolved in an unconstitutional way, resulting in the current standoff and led the work to have become unilateral.

Last October, Abdi Hosh has cancelled a National Consultative meeting on the constitution after a boycott by the joint Parliamentary Oversight Committee and the Independent Electoral body, citing "confusion and lack of Collaboration".

"We have been at loggerheads over the constitutional review process for six months in the past and agreed to fix our disagreement in an inappropriate manner for the sake of the country," added Kamil.

He also expressed his concern over the decision by Hosh announced at Somalia's leaders' forum in Mogadishu, stating that the Constitution Review process will be completed by this year, 2018, a plan that could not be accomplished due to his lack of collaboration with the relevant bodies.

When asked about how the constitution could be approved, Kamil answered a "public referendum" and he expressed pessimistic about the work of the Minister which he fears might result in an approval similar as in 2012.

The chairman of National Independent Electoral Commission of Somalia Dr Mohamed Dahir Afrah did not respond to a GO's request for comment on the working relations between the sides tasked with the review of the country's provisional constitution.

The MP's allegation comes days after the Minister of Constitution Abdirahman Hosh Jibril has arrived in Garowe, the capital of Somalia's northeastern the Federal State of Puntland last Sunday for consultation.

The minister’s trip to Garowe which is the second since taking office early last year with the aim to hold futile consultation with Puntland officials, civil society and parliament on the constitutional review process.