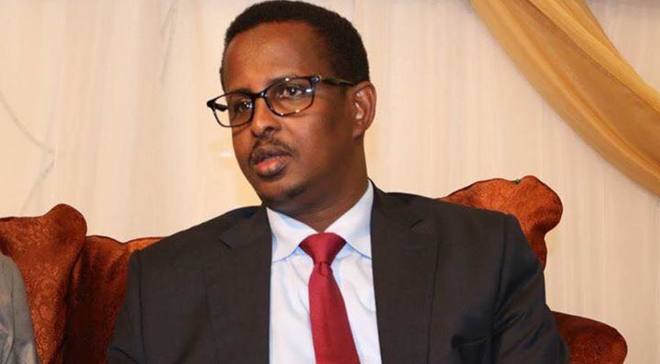 GO has learnt that Senator Bukhari pushed the Permanent Committee for the Upper house chamber of Somali Federal Parliament put Qalbi Dhagah's extradition case top on the agenda of the Senate session.

Senate Speaker, Abdi Hashi Abdullahi said the Upper House chamber has postponed the debate on the handover of Qalbi Dhagah, after 21 Senators supported it, 11 rejected, whereas 4 others abstained.

Abshir Bukhari has appeared on top list of the 11 Senators obtained by GO, who have opposed the postponement, showing a clear indication of his opposition against Farmajo's Federal government.

Using the extradition of ONLF leader as a tool, Abshir Bukhari and members of the senate are planning to table a motion of a no confidence motion against Somali Prime Minister, Hassan Ali Khaire.

Bukhari and other party members of the Daljir Party have had a political power share in former Federal governments led by Sheikh Sharif and Hassan Sheikh respectively, but became critic after a fallout.

Daljir Party has supported President Farmajo with few votes during February 8 election, seeking in return ministerial positions in the cabinet, but turned as an opposition against the government, after failed to spot in the line-up.

He served as Chief of Staff at Villa Somalia during the reign of President Shariff Sheikh Ahmed which spanned between 2009 and 2012, before being elected as first deputy speaker of the Senate in October, 2016.

Somali people in the country and abroad who have hugely welcomed the election of Farmajo as the 9th President of the country, now worried about the MPs' move of creating political turmoil.