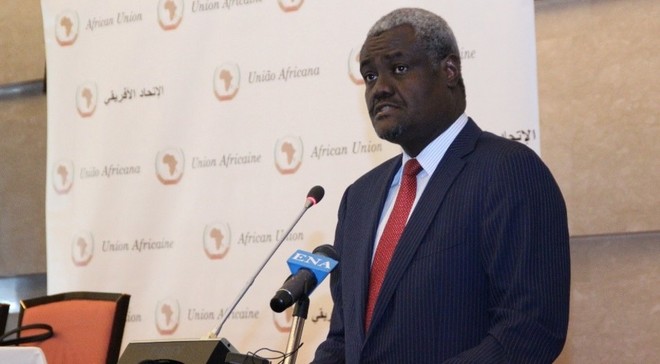 MOGADISHU, Somalia- Security in the Somali capital of Mogadishu has been beefed up on Saturday ahead of the arrival of the African Union Commission chairman Moussa Faki Mahamat, Garowe Online reports.

The Somali police, army and the African Union Mission in Somalia (AMISOM) forces were deployed at various points and main roads in the city to improve the security ahead of the AU chairperson visit.

The roads locked-down, include Maka Al Mukarama, Sayidka, KM4 junction, Zoobe and the Airport streets, which lead to the heavily fortified Somalia's Presidential Palace in Mogadishu, the Villa Somalia.

The chairman of African Union Mahamat arrived in Mogadishu on an official visit to meet with the new Somali leadership, including President Mohamed Abdullahi Farmajo, along with other top government officials.

Thousands of the city's residents were seen on Saturday morning footing to workplaces, schools and health centers in Mogadishu as public transport halted following movement restriction.

This is the first visit of Mahamat since his election as the new African Union chairperson early this year in Ethiopia.