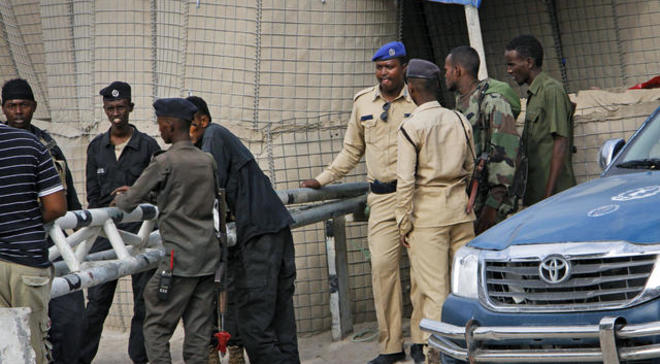 MOGADISHU, Somalia - Two Al-Shabaab fighters were gunned down by police in Mogadishu on Monday, officials confirmed, hours after they killed a civilian within the city, further exposing the unending threats from the militants.

Although police are yet to release the names of the latest Al-Shabaab victims, it's believed that they are part of the Al-Shabaab gang which has been causing mayhem through frequent assassinations and harassment of civilians in the city.

Police records indicate that the militants had assassinated a civilian within the town on Sunday evening, before trying to escape from the site. There are also many deaths related to the two individuals, police said.

In an encounter with security forces, the two were killed instantly as they tried to engage with the police in a fierce gunfight, authorities said, adding that "their bodies we're displayed for public viewership" after the operation.

Abdirahman Mohamed, the Wadajir district commissioner, hailed the police for a "fantastic" job when he visited the scene, confirming that the two men were "notorious" Al-Shabaab operatives within the capital.

"We have established that these are the men who killed a businessman identified as Aboorey. They have also rained terror on our innocent people. As your government, we shall continue to pursue these criminals," he said.

Further, he added: "I wish to thank our security forces for responding swiftly. These people have derailed efforts to build a stable nation in the pretext of pseudo ideologies. We shall ensure their criminal activities are stopped."

Although the motive of the assassination is still a mystery, the militants shot the deceased several times in the head within the Dharkenlay district, eyewitnesses said. Attacks against businessmen by the Al-Shabaab are common in Somalia.

To declare the victory against Al-Shabaab, police displayed their bodies and fired severally on the air, sources said. Although Al-Shabaab is yet to take responsibility for the death of the businessman, the group has been targeting several businesses for the collection of taxes.

Incidentally, their elimination comes a few hours after the Al-Shabaab took responsibility for unprecedented attacks on the heavily fortified Halane Base Camp within the vicinity of Aden Adde International Airport.

The Sunday's attack left four civilians dead after the militants fired around seven mortar shells to the facility which hosts the AU forces in Somalia besides being home to several Western diplomatic missions.

Last week, the militants also tried to run over an AU forces base in southern Somalia within Barawe town. Two Vehicles laden with explosives were detonated outside the base following swift response by a contingent of UPDF troops, AMISOM confirmed.

Al-Shabaab militants have been targeting security forces, foreign nationals, and civilians believed to be supporting the fragile UN-backed administration. The group has managed to kill over 4,000 people since 2008.

A group of businessmen from Mogadishu in February told reporters in Nairobi that the militants had started making their way to the Somalia capital, collecting forceful tax called Zakat. The militants, they claimed, work closely with some government bureaucrats.

But the Al-Qaida linked group has lost grip in central and southern Somalia in recent months, following an offensive by the Somali National Army, AMISOM, and the US troops. Ground combats in Lower Shebelle have left hundreds dead.

The US drone strikes have also leftover 60 dead. Since January, the US army has launched a record 39 airstrikes, the highest in such operations around the world, further emphasizing the zeal to eliminate the militants.

The death of the two senior Al-Shabaab officials in Mogadishu comes barely two months after Bashir Qorgab and Yusuf Jiis, who were under US surveillance, were killed in separate airstrikes according to the US Africa Command.