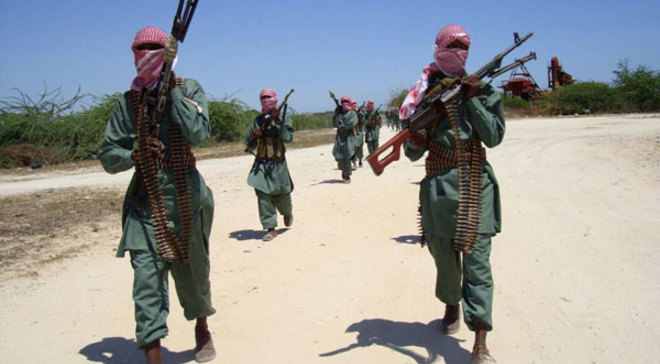 Sheikh Abdulaziz Abu Musab, the military operation for the al-Qaeda-linked group says 59 Ugandan soldiers in a massive car bomb and gun attack on their base in Bula-Mareer area in Lower Shabelle region, about 125Km west of Mogadishu.

Abu Musab stated that the assault began with two suicide car bomb blasts before the extremists stormed the base and killed soldiers at close range during the fighting. 14 militants died in the attack, he added.

But a Somali military commander in the region told GO that the attack was repelled, the base was not overrun and scores of insurgents were killed and several fled with wounds in the counter-offensive.

According to the spokesman, a bomber has rammed his vehicle packed with explosives into a military convoy carrying Ugandan soldiers from Golweyn village to disrupt reinforcement for AU forces in Bula-Marare attacked by the militants.

Al Shabaab said it carried out Sunday at least six separate attacks against Ugandan peacekeepers serving with the African Union, known as [AMISOM] in the volatile region.

The militants fired several mortar shells at AU bases in Qoryoley, Danow and Maryan Gubay towns, however, the number of casualties remains unconfirmed.

AMISOM has not confirmed the deaths of any soldiers in the latest attacks.

Ugandan troops who make up the bulk of the 22,000 African Union force helping Somalia's UN-backed government lost hundreds of soldiers in camp attacks, including the Janale raid on 1st September 2015.