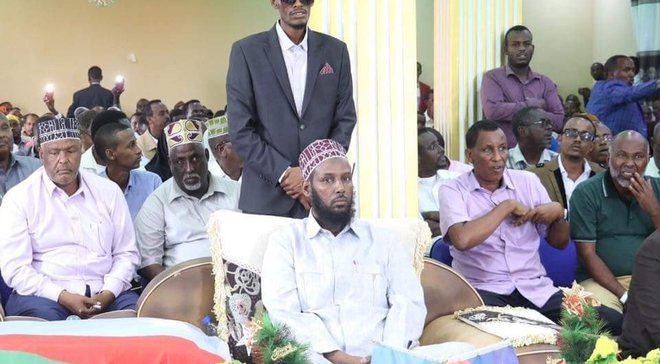 MOGADISHU, Somalia - The Somalia-based Al Qaeda-affiliated al Shabaab issued a statement on the shift of its former Mukhtar Robow who now is vying for public office, Garowe Online reports.

The extremist group has denounced Robow, who defected to the Somali government in Mogadishu in August 2017 as "an apostate who could be killed", saying he joined the line of non-Muslims and enemy.

This harsh-worded message came out days after the once Al-Shabab No. 2 leader and spokesman Mukhtar Robow has publicly announced his candidacy for Southwest regional state presidency this week.

He left Al Shabaab in 2012 after falling out with late leader, Ahmed Godane who was killed in U.S. airstrike outside Barawe city in 2014 and went back to his clan village of Hudur where he has been hiding since.

Robow was taken off the U.S. State Department’s ‘Rewards for Justice’ Program which held a $5 million dollar bounty in early June 2017 after he opted to enter into negotiations with the Somali government.

The Ministry has added that former Islamist turned politician has failed to fulfill the preconditions that allow him to run for a public office. The statement, however, did not give details on the required conditions.

This week, Al-Shabab said it has distributed "Zakah" in cash to 200 poor families in Mogadishu, the Somali capital in what appeared to be a move to mark its presence in the seat of UN-backed government.

Pictures posted on Al-Shabab-affiliated websites showed the group's spokesman, Ali Mohamud Rageh, alias [Ali Dheere], along with other commanders presided over the event purportedly held in the capital.

The group said it distributed thousands of US dollars collected from the wealthy people to the low-income Somali families as living-support with each for sums ranging from $1000 to a bottom $200.

The critics accused the government of failing to handle the city's security and defeat Al-Shabab, which remains a formidable threat and carried out bombings both in Mogadishu and other major towns.