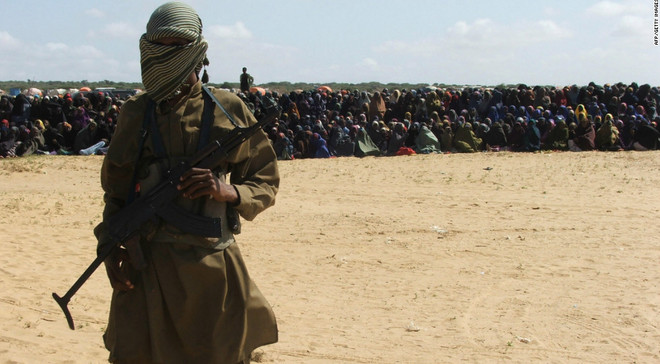 Shukri Abdullahi Warsame, a 30-year-old mother of 8 children was killed by stoning at a public square in Sablale district in Lower Shabelle region with the presence of many residents who watched the execution.

Sablale, a town about 200 km (124 miles) southwest of the capital Mogadishu, is in an area entirely under Al Shabaab's control.
An Al-Shabab judge said Warsame was found guilty of marrying eleven husbands, one passed away and another divorced her while she has been a wife of nine men.

“Shukri Abdullahi has confessed to having illegally married 11 husbands at once without divorce and subsequently the court sentenced her to stone to death for adultery,” said the self-proclaimed judge.

Al-Shabab said it has acted after two of the men fought over the woman, claiming each one to be her legal husband and lastly brought the case to the court.

In areas under its control, Al-Shabab has carried out executions, floggings and amputations after summary trials in cases, including espionage, adultery and theft.

In October 2017, the militants stoned Habiba Ali Isak, a 30-year-old mother of eight children in Sakow, a town about 515 km (320 miles) southwest of the capital Mogadishu for cheating on her husband.

Despite losing major towns since 2011, Al-Shabab has staged deadly attacks in the country, mainly in Mogadishu to drive out African Union peacekeepers, topple the UN-backed Somali Federal Government.