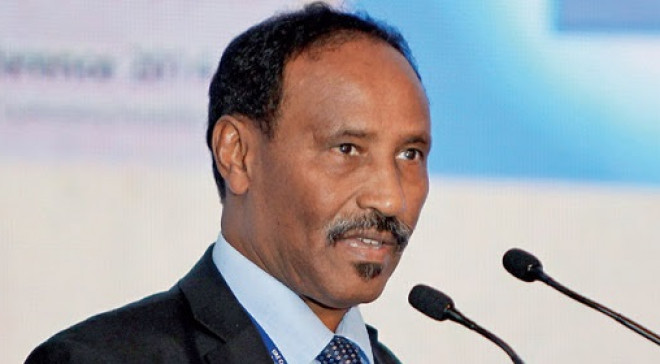 MOGADISHU, Somalia - The Federal Republic of Somalia could be running out of finances and most operations could stall, Finance Minister Abdirahman Beileh has suggested, in what could paralyze the functioning of critical departments in the country.

Beileh, a renowned economist, is now reaching to Somalis in the diaspora for running of the budget after most international partners stopped sending money to the country amid pre-election stalemate.

In a Zoom interview with a Farmajo supporter on Saturday, Beileh said the government has been depending on Saudi Arabia and Qatar aid in paying the Somali National Army [SNA], lawmakers, and even civil servants, an indication that the economy is on its knees.

Already, he noted, most of these funds have been exhausted, thus the call for support from those in the diaspora, who have been also largely supporting the fragile economy. There are millions of Somalis abroad, especially in the UK, Australia, Canada, and the US.

The minister explained that the Federal Government of Somalia spends about $30 million [USD] monthly on government salaries, and those international donors provided over 50% of that budget.

"I've opened two accounts, and I need Somali's to contribute. I'll be briefing the Prime Minister on the updates. I'm calling on every Somali to pay what they can," he said, noting that the treasury had almost dried up.

He also highlighted some of the progress made by Somalia in terms of debt relief among others. The country has managed to secure debt relief in the last couple of months, with the International Monetary Fund [IMF] and World Bank playing a critical role.

Somalia largely depends on Aden Adde International Airport and the main port for domestic taxes and the money collected cannot help in running internal operations. There are also claims that Al-Shabaab collects more revenue than the government.

To streamline operations and improve taxes, he noted, the government has automated revenue collection. Since 1991, Somalia has struggled to strengthen its institutions due to weak governments, which also depend on International Community.

His sentiments come amid political tensions in Mogadishu following the Lower House decision to extend President Mohamed Abdullahi Farmajo's term by two more years. The move has been widely condemned but the country is now blaming external actors for the stalemate.

Somalia's Ministry of Foreign Affairs shot back, saying that the government will not tolerate threats or interference from outside forces on internal matters.

The Somali government is relying on international aid and received US$ 1.9 billion in official development assistance in 2019 that was almost equal parts humanitarian [US$ 934 million] and development aid [US$ 924 million].