Somalia and Eritrea accused of deploying troops to Ethiopia 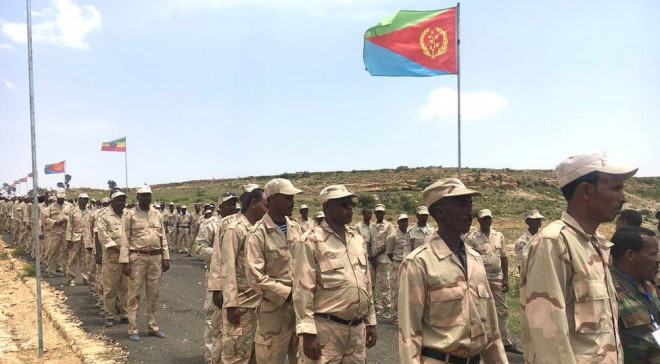 Eritrean troops arrived at the Zalambessa border for the reopening ceremony [Photo: BBC]

MOGADISHU, Somalia - Somalia, and Eritrea have been linked to the deployment of troops to Ethiopia, in a bid to assist Addis Ababa in fighting the Tigray Defense Forces [TDF], formally known as Tigray People's Liberation Front [TPLF].

The United Nations has now questioned the decision by the two nations to vote against the creation of an investigations team that would probe the ongoing war in Ethiopia, which has left thousands of people dead.

Somalia and Eritrea joined China and Russia in voting against the decision to investigate Tigray conflict, despite most countries backing the resolution. There have been previous accusations that both nations have troops in Ethiopia.

Out of the 47 members, 15 member states voted against the resolution while 21 endorsed it. A further 11 abstained. The resolution seeks to establish an international Commission of Human Rights Experts on Ethiopia, to be appointed by the President of the Human Rights Council.

In June this year, the United Nations Special Rapporteur to Eritrea confirmed that Somali troops training in Asmara were sneaked to Tigray where they participated in the fight against TDF. Despite Somalia denying the reports, Eritrea would later admit the presence of her troops.

The troops had been training in Eritrea since 2019 but Mogadishu initially denied the reports. However, the federal government of Somalia would later also admit presence of her troops in Eritrea where they have been training for a while.

“The Special Rapporteur also received information and reports that Somali soldiers were moved from military training camps in Eritrea to the front line in Tigray, where they accompanied Eritrean troops as they crossed the Ethiopian border,” the report read in part. The Somalin trainees were also present in the historic city of Aksum, the report noted.

The Somali troops were part of several young men who were clandestinely taken out of the country from 2018 by Villa Somalia. Parents were told that their children were being taken to Qatar to build the World Cup stadia but it later emerged they were in Eritrea. Outgoing President Mohamed Farmaajo has been accused of seeking to use the soldiers for his re-election bid.

Eritrea has also been variously accused of supplying troops in support of the Abiy Ahmed administration. The US and the EU said in August more Eritrean troops had crossed into Ethiopia even after Federal Government in Addis Ababa said they had left the country.

Abiy Ahmed is fighting for survival in the country after TDF gained the most ground, but the Tigray rebels have since pulled back awaiting to unleash according to Getachew Reda, the spokesperson of the Tigray Defense Forces.