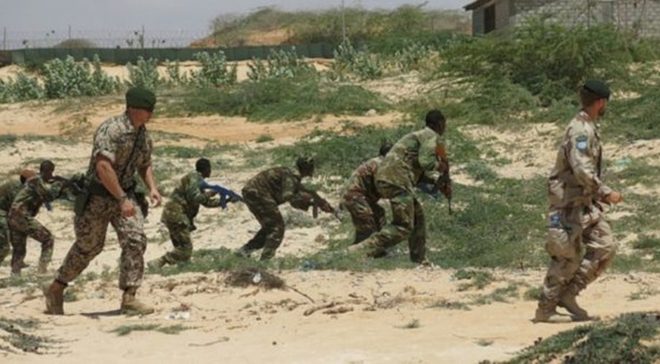 BARIIRE, Somalia - At least 10 people have been killed in an attack carried out by the Somali and U.S. forces on a farm in a small town in Lower Shabelle region on Friday morning, Garowe Online reports.

Ali Nur Mohamed, deputy governor of the Lower Shabelle Regional Administration, told GO over the phone that the deadly raid has occurred near Bariire village, about 40KM west of Somali capital, Mogadishu.

U.S. and Somali special forces using two helicopters have swooped into suspected farm in the area, and shot dead ten farmers, including elderly men and snatched others alive during the undercover operation, according to Mohamed.

"We don't know yet the cause behind the deadly attack by the allied troops targeted the farm, which belongs to a local farmer named HusseinTabliq and why they killed the civilians," he added.

Names of the Farmers killed in the U.S.-Somali raid.

Hundreds of residents in Bariire protested against the US-Somali air raid killed 10 innocent civilians on the farm, and called on Somali Federal government to probe into the incident and to bring to justice all those responsible for the "mass murder".

Somali government is yet to release its own statement concerning the attack, but, several Federal lawmakers have condemned the civilian killings and joined their voices on the call for an investigation.

Bariire, which an strategic small town located in Lower Shabelle was recaptured by Somali forces, backed by AMISOM and U.S. troops following a joint offensive against Al shabaab militants.

May 5th, a U.S. Navy SEAL member, Kyle Milliken, 38, was killed and two troops were wounded in a raid on an Al Shabaab in the area, becoming the first US serviceman to die in Somalia since 1993.