Somalia: AU forces vow to crush Al-Shabaab after foiled attack at airport and military base 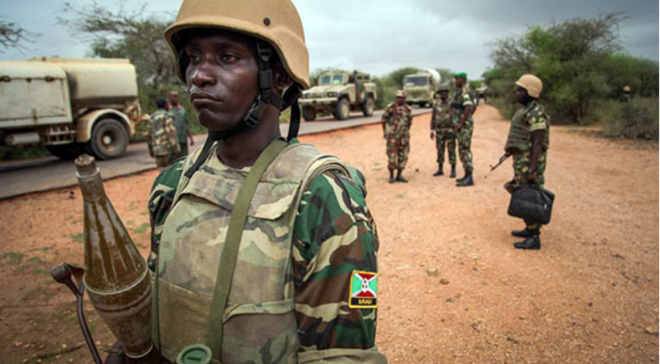 MOGADISHU, Somalia - AU Mission in Somalia has commended its troops for thwarting a would-be deadly attack in Somalia after Al-Shabaab's attackers tried to raid a base occupied by Uganda People's Defense Forces in Barawe town.

One of the vehicles detonated outside the newly refurbished Barawe airport while the second exploded outside a UPDF base in a raid that was resisted by the forces, Omar Sheikh, the District Commissioner for Barawe said.

A gunfight ensued between the alert forces and the militants, ego later scampered for their safety to nearby thickets, reports indicated, in an attempt that could have been devastating to the AU forces and the SNA troops.

In a statement on Friday, AMISOM lauded its troops for "successfully repulsing" the attack, adding that the forces had since secured the base and the vicinity of the airport which was under threat.

The $4.5 million airports were refurbished by the European Union, which, however, came under scathing attack for alleged opaqueness in the entire process. EU is one of the major financial partners in Somalia, a country still struggling with the ripple effect of inter-clan conflicts and terrorism.

But despite the attempted raid, AU mission insisted that the troops will continue working with Somalia until the Al-Shabaab militants are completely crushed in their hideouts within central and southern Somalia.

"AMISOM remains committed to supporting the Somali security forces and the people of Somalia in fighting an enemy that persistently seeks to destroy lives and reverse progress," added the statement.

Al-Shabaab had claimed responsibility for the attack but did not disclose the number of casualties. Previously, the team has been publishing purported figures of casualties, although it's at times fairly exaggerated.

Most parts of the Southwest state are under the surveillance of UPDF troops, who work closely with the Somali National Army [SNA]. Last month, the team liberated the agricultural-rich town of Janaale within the region.

Brig. Richard Karemire, the UPDF spokesperson said the attack was repelled by the troops manning the region, adding that no mission soldier was injured or died during the ambush.

"The forces in ambush successfully blew two enemy vehicles loaded with dangerous explosives. No soldier was injured in the fight and high alert is being maintained," he tweeted on Friday.

"The UPDF in Somalia has been commended by the community for securing Barawe Airport by giving a bloody nose to the attackers. Mopping up operations continue."

Al-Shabaab militants have often targeted military bases within Somalia. In February, the Al-Qaida linked group ran over an SNA base in El-Salini, killing over 25 soldiers, police in Somalia said.

Uganda is one of the major AMISOM contributors. Others include Kenya, Burundi, Rwanda, and Ethiopia. There are a total of 22,000 active AMISOM troops in Somalia, whose term expires in 2021 according to the African Union.

A report released by an independent security group indicates that close to 1,900 AMISOM troops have died in Somalia since 2011. Kenya, it added, is the most affected having lost close to 500 soldiers.