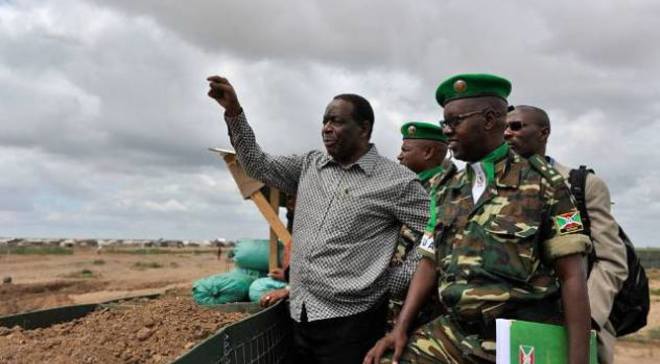 MOGADISHU, Somalia - The African Union top envoy in Somalia on Tuesday called on regional states in Somalia to intensify the war against terrorist group al-Shabab.

Francisco Madeira, the Special Representative of the Chairperson of the African Union Commission (SRCC) for Somalia who held talks with President of HirShabelle state Mohamed Abdi Waare on the security transition plan by the regional peacekeeping force, stressed the need to speed up Somalia stabilization process.

"We discussed the details of the transition and saw where the transition needs to be strengthened, what we think regional forces can contribute and the importance of regional forces in securing these Main Supply Routes (MSRs) side-by-side with AMISOM and with the Somali national security forces," he said in a statement released after the meeting in Mogadishu.

Madeira, who is also the head of the African Union Mission in Somalia (AMISOM), said he was familiar with the challenges that faced HirShabelle, the youngest of Somalia's five federal states.

The AU envoy said the peacekeeping force would work closely with the regional state to bring stability by setting up governance structures in areas AMISOM had liberated.

He said there is need to bring in other components of stabilization like institutions of governance, administrators and the civil affairs officers, humanitarian agencies and police as well as other law and order institutions to help stabilize the state.

The meeting came in the wake of an attack by al-Shabab militants on an AMISOM convoy escorting civilian trucks carrying humanitarian supplies from Mogadishu to Jowhar early March.

Speaking during the meeting, President Waare praised the role the AU mission had played in liberating parts of HirShabelle and regretted the attack on AMISOM soldiers.

"AMISOM is important to us in our daily lives, helping us to tackle these challenges in HirShabelle," he said.