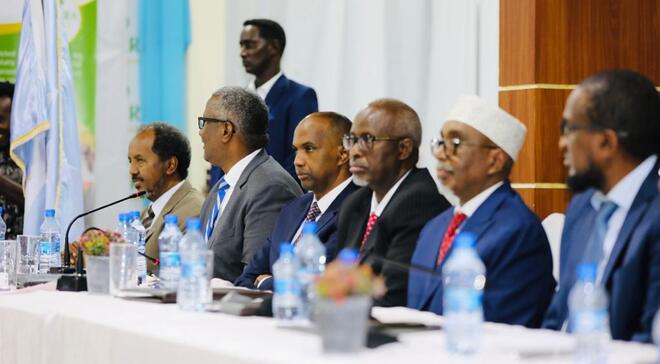 MOGADISHU, Somalia - Somalia's much-anticipated elections continue to hang on a thread following the latest demand by the opposition team which has alleged that the current administration might be having the scheme to rig presidential polls which are scheduled for February next year.

Despite a pre-election deal which was signed in September by representatives from regional governments and the federal government of Somalia, most issues remain contested, with those to oversee the exercise being the latest thorn in the flesh.

In Mogadishu on Sunday, 14 presidential candidates called for the removal of committee members believed to be agents of NISA from the list adding that civil servants and loyalists of President Mohamed Abdullahi Farmajo should also be expunged to give a level playing ground.

According to them, the loyalists of the president, NISA agents, and civil servants were included in the list submitted by Galmadug, Hirshabelle, and Southwest states. The three states have traditionally been used as areas for electoral manipulation, they argued.

For instance, Villa Somalia has been accused of interfering with elections in the three states, with the most known case being in 2018 at Southwest. Former Al-Shabaab deputy leader Mukhtaar Robow was arrested in Baidoa by security forces led by Ethiopian non-Amisom troops before being taken to Mogadishu, leading to chaos in Baidoa.

In their latest demands, the opposition leaders also asked Jubaland and Puntland administrations to review the list by replacing civil servants whose names were submitted. The two states have been critical of Farmajo's administration for many months now.

Already, the disputed Somali Election Commission starts 4-day training on election administration and dispute resolution in Mogadishu amid demand by opposition candidates for a neutral poll body to hold a free and fair election. The team was taken through orientation by Prime Minister Mohamed Hussein Roble last week.

Over the weekend, Roble visited Baidoa in the Southwest in what is believed to be a political tour. Somalia will start holding parliamentary elections in December using an improved clan-based electoral system and those who will succeed to be elected as MPs will pick the president in February.