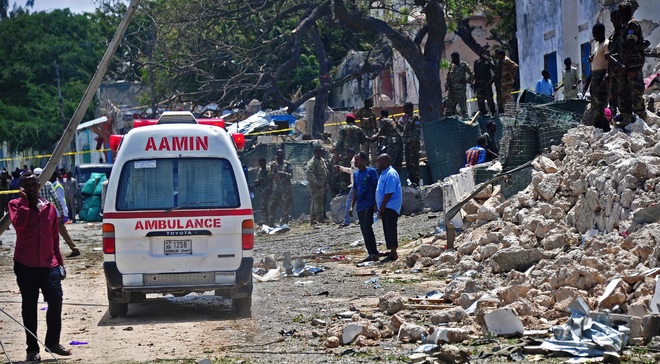 A plume of thick smoke was seen rising above the scene of the blast which occurred at a checkpoint at Daljirka Dahsoon [Tomb of the Unknown Soldier], just 400 yards from Villa Somalia’s main gates.

The dead include a female Somali military officer, Faay Ali Rageh and her husband and bodyguards while several people, among them a member of the country’s parliament were wounded in the car bomb attack.

“Two MPs just walked into my house. They are both safe and escaped from the explosion near the ex-parliament. MP Marian Arif lost one of her staff and my staff took another one of her staff to hospital with a major injury. MP Shabel is fine with a minor injury and is in my house,” said Somali MP, Abdirisak Mohamed.

Al-Shabab has immediately claimed responsibility for the bombing in the city which is often targeted by the al Qaeda-linked extremist group with car bombs and gun attacks in a bid to depose the government.

The latest bombings come amid tight security and heavy police presence on the main streets in the capital to avert Al-Shabab attacks during the Muslim Holy Month of Ramadan.

The Horn of Africa nation continues to struggle to counter Al-Shabab threats to national security.

Concerns have risen over plans to hand over the country's security to Somalia's own forces as a 21,000-strong African Union force begins a withdrawal that is expected to be complete in 2020.

The US military, which has stepped up efforts against al-Shabab in the past two years since Trump took power with dozens of drone strikes, has said Somali forces are not yet ready.