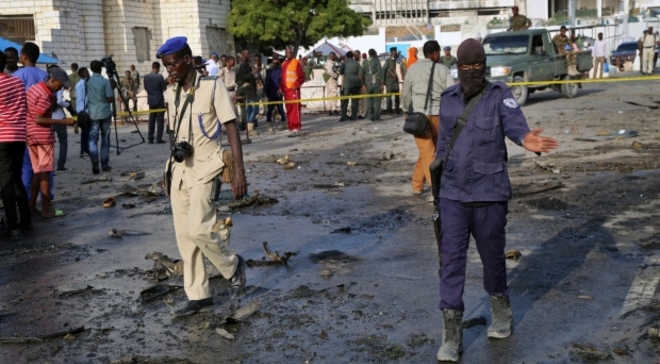 MOGADISHU, Somalia - A blast in Somalia's capital Mogadishu has wounded a member of the country's parliament and killed his driver, in what officials say may have been an assassination attempt, Garowe Online reports.

The blast happened when a magnetic bomb that was placed under the seat of a vehicle carrying the MP, Mohamed Mursal Barrow went off while passing through a security checkpoint near the national theatre.

The incident occurred on Saturday evening.

A huge cloud of smoke could be seen billowing over the area dotted with security checkpoints erected along a road leading to the presidential palace, whose main gate is just 200 metres (yards) from the blast site.

A source within Mogadishu police confirmed to Garowe Online that the Federal lawmaker has sustained critical wounds in the explosion and rushed to a nearby hospital in the capital for medical treatment.

The Al-Qaeda-linked Al-Shabab extremist group claimed responsibility for the car bombing, the latest targeting senior officials as the militants step up the fight to undermine the Western-backed government.

Mogadishu has in recent months seen a number of deadly attacks on high-profile targets, including the heavily fortified Presidential Palace, Interior and Security Ministries' HQ and main local government offices.

Last week, the leader of HirShabelle State, Mohamed Abdi Waare warned the MPs elected from his region about threats to their personal safety and urged them to be vigilant due to the insecurity in Mogadishu.

Despite being driven out of swathes of territory, Al-Shabab staged attacks in the capital and neighbouring Kenya to compensate for the country’s military involvement in a regional drive against militants in Somalia.