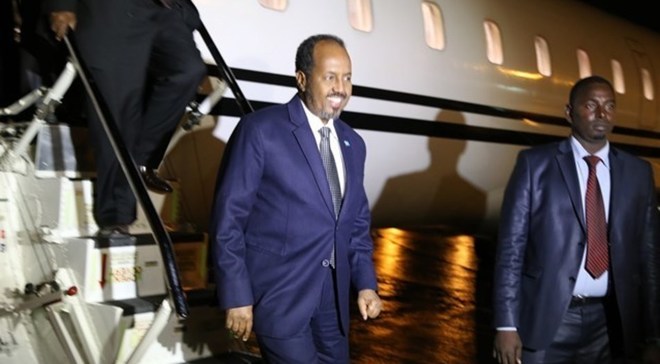 Caretaker President Mahmoud is scheduled to attend the 28th ordinary session of the assembly of heads of state and government of the African Union. Ethiopia is hosting African Union summit at the AU headquarters in Addis Ababa.

During the summit, The African Union Assembly is set to elect a new Chairperson of the AU Commission, Deputy Chair and eight Commissioners, and deliberate major issues across the continent including African development plan.

However, Mohamoud is expected to address the African Union Assembly in the summit, and discuss about Somalia’s current affairs and the upcoming election.

Caretaker President who is vying to retain his seat is facing stiff competition from rival opposition opponents aiming to unseat him in the presidential election in February 8.

Before departure to Addis Ababa, Mahmoud was reported to hold meeting with members of the Upper and Lower Houses of Somalia’s Federal Parliament, where he addressed them about his re-election campaign’s agenda.

New lawmakers will elect a new Somali President in a secret ballot in next week, following series of delays to the electoral process that was schedule to conclude in 2016