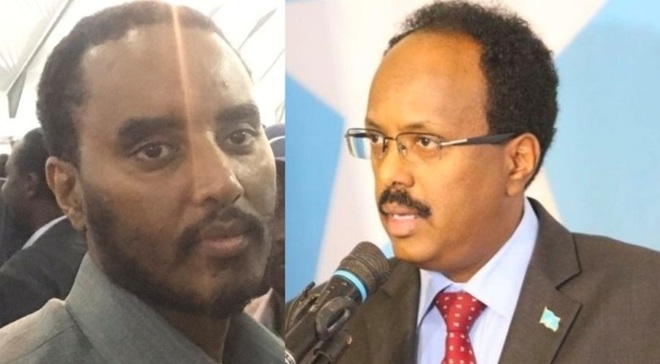 MOGADISHU, Somalia - A confidential intelligence report obtained by GO has shed light on the historical background of the current Chief of Staff of Somalia's Presidential Palace, Villa Somalia, warning a unique threat to the president as result of the close relations he maintains with the former radical Islamist, Garowe Online reports.

According to the leaked information shared by Countries with the strategic interest in Somalia, Mr. Fahad Yasin has become a member of the now-defunct Islamic group of Al Etihad and took part battles in Arare, Gedo, and Bosaso in the 1990s.

The report says in late 1990s, Al Ittihad group which reviewed in its strategy towards its fight in Somalia and some senior figures, including Hassan Turki, Sheikh Hassan Dahir Aweys, Sheikh Abdullahi Ali Hash and a section of the group's youth wing due to challenges, opting for a more lenient Islamic system in Somalia through which Da'wah would be used to spread Islamic teaching rather than gun-point.

Fahad Yasin studied journalism in Yemen and worked for Somalitalk, a mouthpiece website owned by the Islamic extremist organization, Al-Ittihad al-Islami before joined the Doha-based Al Jazeera's Arabic-language channel where he worked as the Mogadishu bureau chief and correspondent.

After years with Al Jazeera, Fahad was assigned to serve as the head of the Network's office in Mogadishu, the Somali capital, a post he was rewarded because of his close relationship with the Al Qaeda-affiliated Somalia-based extremist group Al Shabaab.

Since joining research center, Yasin did not release reports and features he used to write on Somalia, sparking speculations about his mysterious work, with many raised the possibility that he was involved in Intelligence activities.

However, according to the report, Fahad has been assigned to gather information about Politicians and the Political situation in the horn of Africa country beset by decades of civil war as he was the gateway to the leadership of Somalia.

In the beginning of his new post at the time, Mr. Yasin has supported Jama Ali Jama, a former Puntland presidential contender in his struggle towards presidency amid standoff with late former Somali President Abdullahi Yusuf Ahmed, who spent years in bloody battles against extremist group, , Al-Ittihad of which Mr. Yasin was a member of 1990s.

In 2012, the former Al Jazeera journalist has helped Hassan Sheikh Mohamud, the former Somali President to come to power, having funded his bid for Presidency. However, their relationship hasn't lasted longer and crumbled in a short period of time, owing to Mohamud's profound suspicions and resistance towards Yasin's hidden agencies towards Somalia.

Following Qatar's failure in convincing the former Somali president Hassan Sheikh Mohamud to promote its strategic interests in Somalia, it had to revisit its Somalia approach. And this time, a painstakingly planned strategy that'd ensure installing a Somali president who could prioritize Qatar's interests as a primary objective.

Therefore, Mr. Yasin had a new assignment: Hand-picking the next Somali president

He has since set up links with Mohamed Abdullahi Farmajo shortly after he was ousted as Somali Prime minister in 2011 during Kampala accord.

Yasin has stepped up his association with Farmajo who rose to fame following his resignation.

According to the intelligence report, Yasin tried to seek the post of the Prime Minister for Farmajo from President Hassan Sheikh Mohamud during his tenure, an attempt resisted by Mr. Mohamud, leading to a multi-fronted political fight against his old friend in the ruling Damul-Jadid group.

As Mr. Mohamud's tenure was drawing closer to an end, Mr. Fahad has endorsed Mr. Farmajo as his favorite candidate for the next Somali president. However, there was still an impending assignment for him to complete: Selecting the prime minister.

During his search a suitable candidate, Fahad has met Hassan Ali Khaire, the current Somali PM while working with the relief agency, NRC as Oslo and Doha were working on a plan to facilitate talks between Al Shabaab and Federal Government led by Hassan Sheikh.

This has led the UN Monitoring Group to release a report accusing Hassan Ali Khaire of having links with Al Shabaab, the terrorist group fighting to topple the Western-backed Somali government.

Also, Fahad Yasin made an effort to make a relation with Mohamud's re-election campaign team, including current PM Hassan Ali Khaire, Thabit Abdi Mohamed, the mayor of Mogadishu, Jamal Mohamed Hassan, the Minister of Planning and Abdirashid Mohamed, the petroleum Minister promising them posts in Farmajo's government, if he was elected as the President of Somalia.

Besides his position as Villa Somalia Chief of Staff, Fahad Yasin leads a group that worked with him during President Farmajo election campaign and manages Qatar's funds for the politics in Somalia.

Moreover, Yasin secured the loyalty of 70 Somali lawmakers who voted for Farmajo during February 2017 polls and pays them monthly stipends ranging from $3,000 to $4,000, in a bid to keep Villa Somalia's influence in the Parliament stronger.

This issue has made Fahad a more powerful figure in the decision-making process of the country, with a lot of money invested in politics, evading government's accountability.

The report seen by GO further indicated that Fahad Yasin opposes the Federalism system, rebuilding of Somali National Army (SNA), the Presence of the UN-mandated African Union Mission (AMISOM) and policy of Western countries towards the country.

But, according to the report, Yasin has instead given his blessing for the formation of a rebel group led by former Al Shabaab deputy leader and Spokesman, Sheikh Mukhtar Robow Ali "Abu Mansur"  who has recently defected to Somali government to fight against the militants instead of rebuilding SNA.

Finally, the Intelligence report concluded that Fahad Yasin is trying to handpick and install the next head of Somalia's Intelligence Agency (NISA) or the deputy position in a bid to organize Qatar-funded spy team to be trained by Iran to fulfill on Doha's hidden agenda in Somalia.