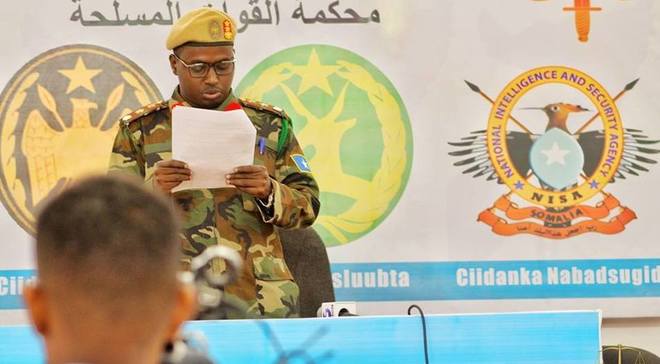 MOGADISHU, Somalia - A local government official in Mogadishu was on Sunday slapped with a 3-year sentence over links to Al-Shabaab militant group, officials said, in the latest crackdown against the insurgents.

Nur Ali Ahmed alias Mahad Alle, who has been serving as acting director of works department at Mogadishu Municipality, was however exonerated of attack at the Mayor of Mogadishu offices in 2019.

The convict, the court established, had denounced the terror group in 2010 but failed to follow due process in registering as a defector.

Al-Shabaab has been suffering a series of defections in recent years, coupled with internal squabbles among top commanders, spy agency, NISA said last week in series of tweets.

But during the hearing, Ahmed insisted that he reported his defection to authorities, although the court failed to find tangible evidence to support his assertions, officials said.

Prior to his appointment as acting director in the municipality, Ahmed worked at the seaport and one of Mogadishu's hospitals, the court established.

He was arrested in July 2019 in connection to an explosion at Mogadishu mayor's office, which left Mayor Abdirahman Omar Osman and seven others dead.

Basira Abdi Mohamed, a senior aide to the mayor, was confirmed to be the suicide bomber who carried out the deadly attack at Mogadishu municipality HQ. She was blind, authorities said.

The military court, which plays a key role in prosecuting suspected militants, released Maryam's brother but ordered him to report regularly to authorities.

Although Mr. Ahmed was cleared of any role in the bomb blast at the mayor's office, he was incriminated of past dealings with the terror group.

Cases of Al-Shabaab's infiltration to government agencies are becoming rampant with businessmen warning of possible take over by the militants in Mogadishu.

Although the group was flushed out of the capital, the businessmen told reporters in Nairobi, Al-Shabaab is gradually taking over Mogadishu and has since controlled taxation in major businesses.

In January, a college teacher was convicted of Al-Shabaab's assassinations in Somalia by the military court, further raising fears about the escalating infiltration.

Mohamed Haji Ahmed [Ilka-Asse], the college teacher turned Al-Shabaab executioner, was sentenced to death after being convicted of assassinating many people, among them three army generals, a police corporal, and a deputy attorney general in Mogadishu.

There are also reports on the infiltration of the group to spy agency NISA, further derailing Somalia's efforts to eliminate the terror group.

According to independent reports published by various entities, international partners no longer shares information with NISA due to "deep infiltration" by Al-Shabaab.

For instance, Abdisalan Mohamed Hassan, a top NISA official, was found guilty of sharing intelligence with the Al-Shabaab in 2014. He's serving a life sentence, officials said.

The rampant convictions of government officials have raised alarm in Mogadishu, denting a blow to President Mohamed Abdullahi Farmajo's commitment to eradicate the group.

Although the group had been flushed out of Mogadishu, it often executes sporadic attacks in the capital, mainly targeting security forces and foreigners, police said.