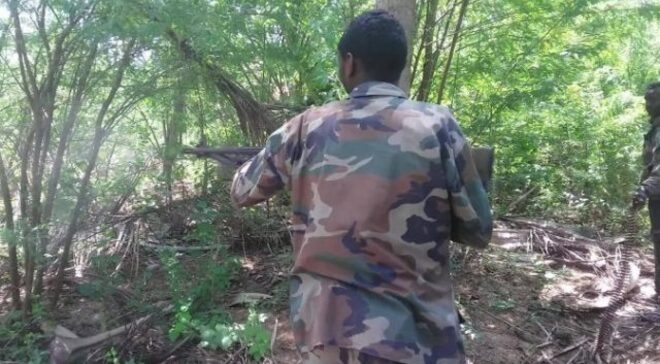 BURDHOBO, Somalia - A top government official from Jubaland survived an Al-Shabaab attack on Tuesday, Garowe Online has learned, in the latest unprecedented raids by the Somalia-based militants targeting civilians and civil servants.

The militants, who were armed to teeth, attacked government troops guarding Abdullahi Sharif, the District Commissioner of Burdhubo within Jubaland, triggering a heavy gunfight between the two sides.

At the time of the attack, the official was at his office, witnesses said, discharging his duties as a government representative in a region which has been marred with violence, involving Al-Shabaab, Somali National Army, and Jubaland regional forces.

Several soldiers and militants died during the confrontation which lasted for hours, with dozens also injured according to state officials privy to the incident, which could yet again raise serious questions about the safety of the militants.

The soldiers who were injured during the scuffle have been taken to various army bases within Gedo for treatment. For the Al-Shabaab, they are under the close surveillance of the military, who will take disciplinary actions against them, a source said.

During the battle, Sharif, a veteran administrator, managed to escape unhurt to a nearby Ethiopian National Defence Forces [ENDF] army base where he's currently taking refuge as the situation is being observed.

After the fierce gunfight, the militants also managed to escape from the scene to their hideouts, authorities said. A serious manhunt has been launched by the Ethiopian troops, who have been aiding the SNA troops, within the troubled Gedo region.

The militants have been targeting security forces and government officials, a strategy that they either execute through the use of IEDs or late night attacks. Their raids in recent weeks have, however, failed to materialize until Tuesday.

The incident comes barely a day after the Al-Shabaab militants also launched another attack targeting Ethiopian troops in the neighboring Southwest on Monday. According to reports, the militants raided a base between Bardale and Qansaxdheere.

Armed to teeth, the militants fired several at the army base located between Bardale and Qansaxdheere, several miles from Southwest's regional administrative capital of Baidoa, multiple sources confirmed.

After several hours of a gunfight, dozens of militants died while others were critically injured. Both the ENDF and Al-Shabaab are yet to issue a public statement about the incident, which was the first in as many months targeting ENDF.

Burdhubo town fell to the hands of the Federal Government of Somalia in 2014 after the Al-Shabaab militants were driven out by the Kenya Defense Forces [KDF] and SNA troops in a joint military operation.

Gedo region has been the epicenter of chaos engineered by several clashes of interests in recent months. Al-Shabaab has been taking advantage of the differences between Jubaland leader Ahmed Madobe and President Mohamed Abdullahi Farmajo.

Interestingly, the Ethiopian troops work closely with SNA soldiers while the KDF team supports Madobe's administration. This has triggered heavy fights between the allied forces, further giving Al-Shabaab room to expand their territories.

Last week, the Al-Shabaab militants also had their raids at Jubaland forces' bases in Bilis Qooqani and Dhobley thwarted by the KDF. The militants have, however, lost several swathes of rural southern and central Somalia to government forces.