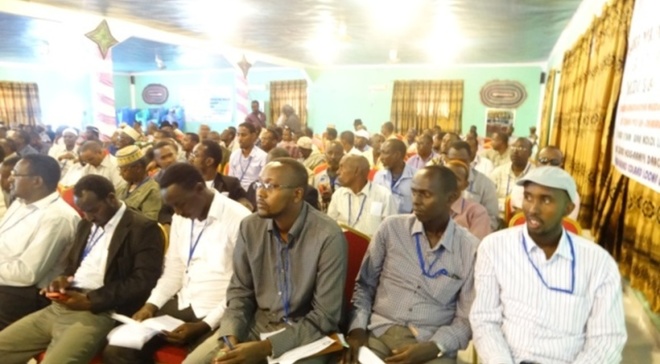 ADADO, Somalia- State Parliamentarians of Somalia’s interim Galmudug administration have refused to hold talks with the newly sworn-in MPs-hails from Galmudug- aimed to end political crisis in the region after voting out the President from office, Garowe Online reports.

Galmudug President Abdikarim Husain Guled, was accused of incompetence and poor leadership, has lost a no-confidence motion after majority of the state parliament voted in favor to it this month.

However, reports said the delegate is led by the outgoing Federal Minister of Interior, Abdirahman Odowa, along with other Federal MPs who are intending to mediate political differences between President Guled and state MPs.

On the other hand, a state parliamentarian who spoke to GO under a condition of anonymity, noted the meeting does not serve the interest of the region.

“The state Parliament did not meet the delegate, we are not willing to meet them too, because it does not serve the interest of our people and region,” he added.

He further criticized the Federal MPs who are representing Galmudug, saying they failed to carry out duties to protect the interest of their constituencies, instead they are planning to keep Guled in office.

“Those MPs were originally elected in rigged elections that were facilitated by the ousted President [Guled], and now they wanted to resolve the matter in a similar manner,” he added.

This also comes amid ongoing meetings between Galmudug-native politicians and state parliamentarians to resolve the crisis.

Early this week, the Parliament building in Adado town came under attack following clashes between Somalia’s Intelligence Agency and Police forces in nearby areas.

International community and Somali leaders have expressed concerns to the recent developments in Galmudug and urged stakeholders to end political difference though dialogue and warned against violence.