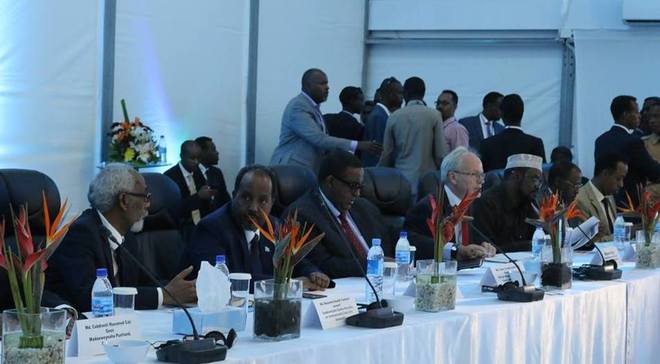 MOGADISHU, Somalia- Political talks in Mogadishu have not led to any breakthrough as differences are still looming larger over electoral transition, Garowe Online reports.

Mohamud said, Lower House would have representatives on the basis of 4.5 power sharing formula while Upper House would be evenly distributed to Federal Member States and interim administrations, with additional three seats being allotted for Puntland and Somaliland.

However, the suggestion culminated in disagreement following Galmudug President, Abdikarin Hussein Gulled’s objection to any concessions to be made in favor of Puntland and Somaliland.

Somaliland which declared its independence from the rest of the country as a defacto sovereign state in 1991 has not been officially represented in long dragging National Consultative Forum (NCF).

Puntland wants that district-based and region-based models be adopted for Lower House and Upper House respectively.

Earlier in January, Somali leaders failed to agreeon a political roadmap ahead of benchmark due date.