Somalia: Extend term at your own risk, Farmajo warned 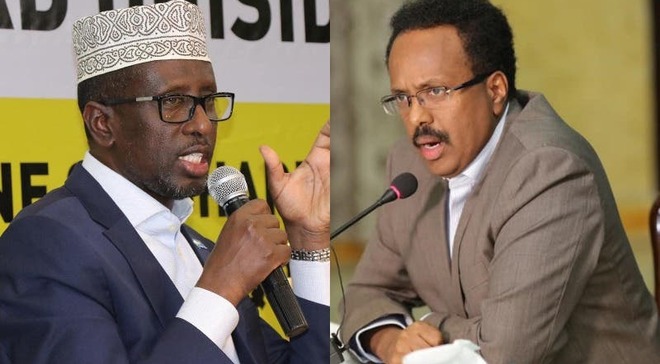 MOGADISHU, Somalia - The Federal Government of Somalia should not attempt to extend its current term by "whatever means", former President Sharif Sheikh Ahmed has warned, adding that "we must hold elections for the purpose of peace and prosperity".

Sheikh Ahmed, who served as Transitional Government leader from 2009-2012 told reporters on Tuesday that the regime of President Mohamed Abdullahi Farmajo should not "even think of it', adding that "the consequences will be catastrophic".

While in the company of his successor Hassan Sheikh Mohamud after meeting Lower House Speaker Mohamed Mursal Abdurahman, the tough-talking former leaders insisted that the current impasse must be unlocked through constructive dialogue.

"He should not even think about it," Sheikh Ahmed said, adding that, "this will be catastrophic to the people of Somalia and democracy in general. We must hold elections as envisaged in our constitution."

He went on: "For this to happen, we need urgent dialogue and that's the mood on the ground. Anything contrary to this is against the spirit of nationalism in our country, we can't afford to have a term extension, it's very risky."

According to him, the dialogue was the only way out to avert possible "crisis" and political quagmire, arguing that the current administration should "stop being an impedance to things of national interest at a very delicate time".

The term of the current administration is set to expire in the next six months, but there are a number of issues which are yet to be solved through consensus in Somalia, a country that has never had a democratically elected government since 1960.

Some of the pending issues include the electoral model which should be adopted, delimitation of boundaries, implementation of 30% quota for women and settling on appropriate representation from Banadir and Somaliland regions.

During his address to Parliament on Saturday, President Farmajo seemed to endorse universal suffrage model as opposed to the clan-based system [4.5], arguing that "our people should be allowed to choose their leaders independently".

On Tuesday, Puntland backed sentiments by Senate Speaker Abdi Hashi Abdullahi, who had called for "urgent" dialogue before June 25th. In a statement, Puntland accused some leaders of "misguiding" government on the election process, adding that Mogadishu was keen to have the elections delayed.

To solve the impasse, the Garowe-based administration insisted that the much-anticipated dialogue should be held before 20th June. It also accused the government of "instigating" political and insecurity crisis within federal states of Somalia.

Earlier on Tuesday, the US had wadded into the ongoing debate, calling for an urgent dialogue between FGS and federal states. Washington insisted that cooperation between the two entities was crucial for Somalia.

"FGS–FMS engagement and cooperation is urgently needed to resolve political divisions, implementation of debt relief, COVID response," added the statement, which comes amid increasing calls for constructive dialogue between the two parties.

Wadajir party under the stewardship of Abdirahman Abdishakur Warsame had also warned Farmajo against term extension, arguing that the president's Saturday speech had all indicated that the administration was keen to extend the term.

"He made it clear that he doesn't want elections and is ready to extend his term he has chosen the future of darkness, conflict and distrust which will erode our gains. The party calls for an urgent meeting to rescue the country," it said in a statement.

The parliamentary ad-hoc committee on elections and the National Independent Electoral Commission [NIEC] are set to table recommendations to parliament over the upcoming elections, which will be debated before a decision is made.