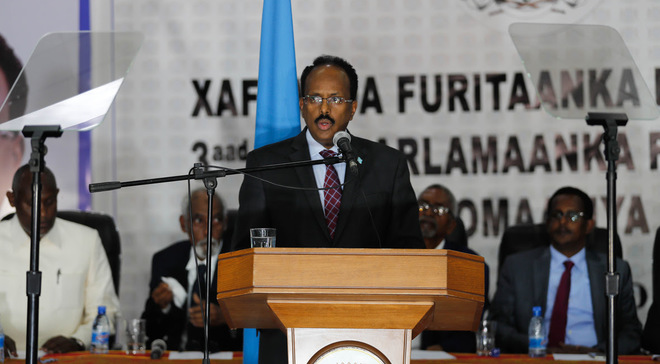 MOGADISHU, Somalia - The President of Somalia, Mohamed Abdullahi Farmajo has for the first admitted corruption in his one-year-old Federal Government in Mogadishu, Garowe Online reports.

Speaking at the opening of the third session of the country's Parliament in Mogadishu on Saturday, President Farmajo said there are corrupt members in the Government who are not loyal to the responsibility they sworn-in to serve for the nation.

"It's undeniable that there a corruption in the government committed by some of us. It's obvious that there is a lack of trust," said President Farmajo during his speech to the National Assembly. He did not elaborate further who were the corrupt areas.

The President, however, did not specify which institutions beset by the fraud and who is behind, but, he acknowledged that there officials committing public property embezzlement and betraying the country which is now recovering decades of lawlessness.

Farmajo and his Prime Minister Hassan Ali Khaire have repeatedly said they would adopt a zero-tolerance policy towards corruption and fight it in all parts of the Federal Government in a bid to promote effective service delivery to the public.

They also promised to crusade against those in the Government involving corruption which has been the main obstacle crippled the previous administrations.

For nearly many consecutive years, Somalia has been on the top of the list of the corruption watchdog, Transparency International.