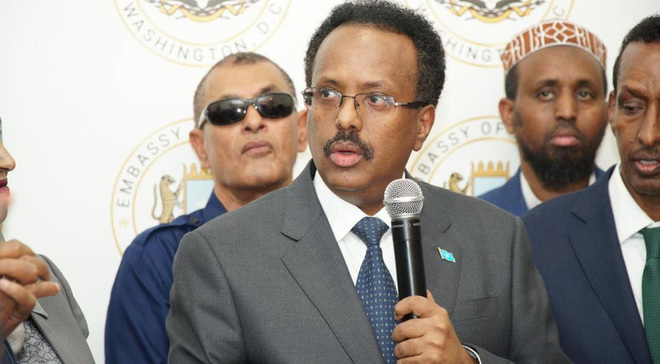 MOGADISHU, Somalia - Somalia National Army [SNA] has a mandate to protect the country's borders, President Mohamed Abdullahi Farmajo has said, adding that "their deployment to Gedo was in order".

About 700 Turkish-trained SNA troops were deployed in Gedo a fortnight ago, raising tensions between Mogadishu-based Federal Government of Somalia and Jubaland, with the latter decrying of "invasion".

Tensions engulfed the region, which has traditionally played a strategic role in the fight against Al-Shabaab to both AMISOM troops and Jubaland forces.

But the deployment of SNA forces and subsequent take over of Balad-Hawo and Dolow districts almost threatened to ignite vicious conflict, which would have caught Kenya and Ethiopia in opposing camps.

In an interview with London-based private Somali Television, Universal TV last week, Farmajo defended his actions, which have attracted retribution from a number of partners.

"It's the sole mandate of SNA to protect the country's borders. This is not interference," he said. "We must do away with this culture, we must defend our territory."

Farmajo, who has struggled to stamp his authority, added: "It's true at times we don't have the capacity but we must do our best. It's the prerogative of FGS to defend our borders."

Mogadishu administration recently accused Kenya of interfering with internal affairs of the country, citing the Jubaland crisis as part of Kenya's "unwarranted strategy" to run the show in Somalia.

Since taking over in 2017, Farmajo has had a rough relationship with federal states, with Jubaland President Ahmed Madobe leading the onslaught.

While Farmajo has often defended his actions, virtually all states have blamed him for "plot to weaken states by imposing his loyalists in leadership".

And in his yet another stern warning to Kenya, Farmajo insisted that Kenya has no "business" in Somalia, adding that "we do not want Jubaland to be misused".

He said: "Kenya has no business in Jubbaland. It cannot interfere. We have a maritime dispute with it, and it will do everything possible to have leverage."

"We do not want Jubbaland to look like it is being used to harm Somalia," Farmajo added. "We will not accept it, and those who are facilitating it, we recognize them as not working in the interests of Somalia."

Kenya and Somalia are tussling over the Indian Ocean maritime dispute at the Hague and inter-party conference has been scheduled to take place in June.

While there have been efforts to go for out of court settlement, Farmajo had insisted last year that "we are confident with court arbitration".

The current impasse in Gedo was triggered by the escape of Jubaland security minister Abdirashid Janan from a Mogadishu prison last month.

After his escape, he was reportedly hosted in Kenya. Janan is accused of "serious crimes" but Jubaland administration has often dismissed them as "political persecution".

Early this month, Somalia wrote to Kenya asking for collaboration to have him extradited to face "fair trial" but authorities in Nairobi have remained mum over the predicament.

But despite the hunt down, residents of Gedo thronged to streets chanting anti-FGS slogans, when Janan escaped, an indication of his unfading control in the region.

Gedo region is manned by KDF and Ethiopian troops, with the former working closely with Jubaland authorities in the fight against Al-Shabaab.

On the contrary, ENDF troops have been working with FGS, a move that has often angered both the opposition bigwigs in Somalia and Madobe.

The Ethiopian troops have often been blasted of helping FGS to manipulate regional polls to the advantage of Farmajo, a claim they have never dismissed or admitted.

"When we succeeded in this, the regional states [have been used] to create obstacles for us. Some of them. Not all of them, we are talking about one, utmost two," Farmajo said.

Rashid Abdi, a security analyst, warned that deployment of SNA troops along the Kenyan border could trigger "a dangerous war" between the two sides.

Also, a section of politicians among them Abdirahman Abdishakur believes that the aggression in Gedo could precipitate fallout in AMISOM and subsequent take over by Al-Shabaab.