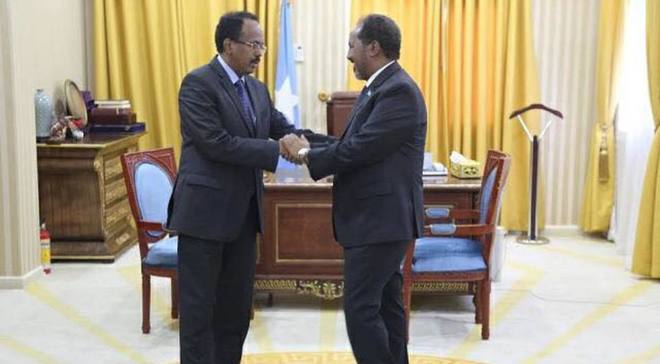 Sources said the meeting has focused on the power-transfer and inauguration ceremony that is expected to take place next week at Villa Somalia in the capital.

After the meeting, Former Somalia President Mohamud took his successor Farmajo for a brief tour to his new office and residence in the heavily fortified Presidential Palace.

President Farmajo thanked the outgoing President for his cordial welcome and achievements that his government has made during his four-year-term in office.

It was the first face-to-face meeting since he was elected last week as the new President of Somalia by the country's newly sworn-in Federal Parliament in Mogadishu.

In the past days, President Farmajo was reported held meeting with foreign diplomats and leaders of Somalia’s regional states at his temporary resident at Jazeera Palace Hotel in Mogadishu,.

Sources said that President Farmajo and regional leaders have discussed cooperation between his incoming government and Federal member states in the country.

Osoble has called on the people of Somalia to work with the new President, as he faces a daunting task in rebuilding the country and to restore peace and stability.