Somalia: Farmajo returns home as officials in custody for graft 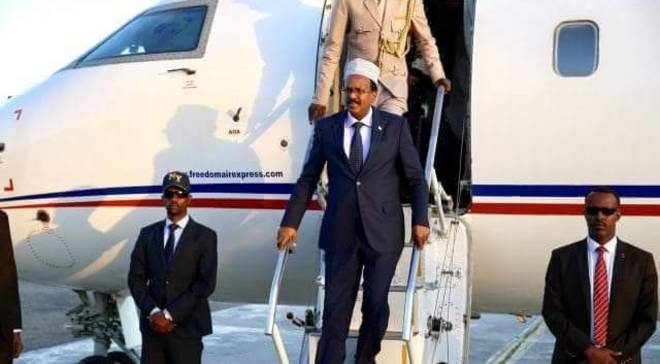 MOGADISHU, Somalia – The President of Somalia’s Federal Government, Mohamed Abdullahi Farmajo has arrived back to Mogadishu on Monday after paying a visit to Djibouti and Turkey, Garowe Online reports.

Upon his arrival at Mogadishu’s Aden Adde International Airport, President Farmajo and his entourage received a warm welcome from Ministers, lawmakers, security chiefs and other high-ranking government officials.

In the first leg of the trip, the President touched down in Djibouti last week, where he held bilateral talks with his counterpart, Ismail Omar Guelleh after relations between the two countries were at their lowest level in history.

Early this month, Djibouti has summoned its Ambassador in Mogadishu, in protest of a recent call by Farmajo asking the United Nations Security Council [UNSC] to lift sanctions imposed on Eritrea in 2009.

The neighbouring Djibouti which is one of the troop-contributing countries to the African Union Mission in Somalia known as [AMISOM] said it has ‘deeply shocked’ by Farmajo’s position on Eritrea sanctions.

On Sunday, the President met with his predecessor, Hassan Sheikh Mohamud in Turkey’s capital city, Ankara. Sources said the two leaders discussed a range of issues, including the current challenges facing the country.

The return of Farmajo came as police in the capital arrested nearly 10 government officials, including the head of Mogadishu port Customs office Ahmed Ali Samow on Saturday evening over graft claims and stealing public funds.

They are being held at the CID headquarters at KM4 area in the capital. Among those targeted in the ongoing anti-graft campaign are deputy minister, directors, assistant directors, and managers.

Somalia is frequently ranked as one of the most corrupt countries in the world by Transparency International due to the lack of accountability and good governance.