Somalia: Farmajo yet to honour promise to journalists as more face court over "petty" charges 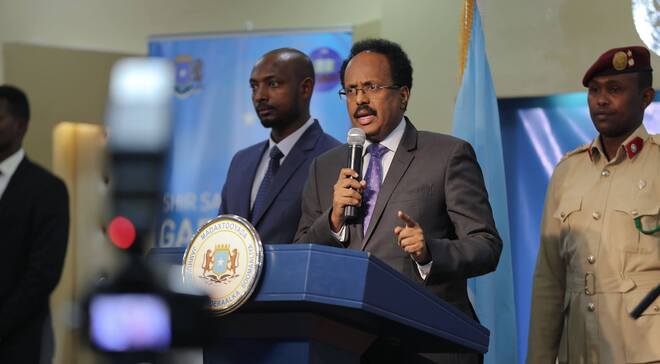 MOGADISHU, Somalia - Over two months after promising to repeal the penal code of 1964 which criminalizes journalism, Somalia President Mohamed Abdullahi Farmajo has remained mute, with authorities continuing with their crackdown against reporters across the country.

In the statement issued on World Press Freedom day, Farmajo termed journalism a "noble profession" while congratulating them for credible reporting and dissemination of news. It was the first time he spoke publicly in support of the media.

"Journalism is a noble profession and the Penal Code of 1964 will be reformed to ensure it is not used against journos. My administration fully supports the decriminalization of journalism and free expression through legal reform," he said.

But despite his assurances, the situation continues to deteriorate, with more reporters finding themselves on the wrong side of the law, but often stage-managed to score certain political goals.

On Tuesday, Abdiaziz Ahmed Gurbiye, an editor with GoobJoog Media, would appear again in a Mogadishu court where among others, he will be battling against defamation charges. He had been arrested on April 14 for publishing "critical" commentary on the country's preparedness in the handling of COVID-19.

The HRW has now faulted the Somalia government of being harsh to reporters, arguing that people have a right to criticize those in offices and state institutions. Somalia, it stated, should improve the atmosphere and conditions for journalists to work freely.

As the African Commission on Human and Peoples’ Rights has stated, HRW adds, those “who assume highly visible public roles must necessarily face a higher degree of criticism than private citizens; otherwise, the public debate may be stifled altogether.”

The rights group now wants the charges against Abdiaziz dropped just like other journalists facing the same predicament, arguing that criticism should be embraced in democratic societies. The government, it said, should religiously support freedom of media.

"Authorities should immediately drop the charges against Abdiaziz and make clear that critical commentary is a welcome element of a democratic society," read the statement. "As Somalia prepares for an electoral process, the government should demonstrate that independent journalism is more important than ever."

According to statistics issued by the Reporters Without Borders, over 20 journalists have been summoned, detained and arraigned in court since January, marking one of the highest records within the same period across the world.

Mohamed Abuuja remains the longest-serving detainee having been arrested in February in what the spy agency NISA said were "links to Al-Shabaab". Despite the claims, no proof has been given and he has been sneaked to court without the knowledge of his lawyers and family.

"Whether judicial detention, police arrests or just summonses for questioning, the level of abuses against Somali journalists continues to be very high,” said Arnaud Froger, the head of RSF’s Africa desk.

“Only strong, ambitious measures will succeed in ending these practices, which amount to systematic intimidation. We reiterate our appeal to Somalia’s federal authorities and Somaliland’s local authorities to decree a moratorium on arrests of journalists pending reform of media legislation that abolishes imprisonment for media offenses.”

Intimidations, harassment, arrests, and executions are some of the predicaments journalists face in the Horn of Africa nation. Dozens of reporters have been exiled due to pressure both from the government and the Al-Shabaab militants.

Recently, authorities in Somalia pressed charges against renowned Voice of America reporter Harun Maruf, accusing him of having links to the Al-Shabaab militants. But the summonses backfired following criticism from members of the public who accused the state of "disrespecting" the Washington DC-based reporter.

Somalia is one of the most difficult countries for one to work as a journalist due to persistent oppression instigated by the state and Al-Shabaab. Records indicate that dozens of reporters have either been killed or disappeared under unclear circumstances in the past decade.