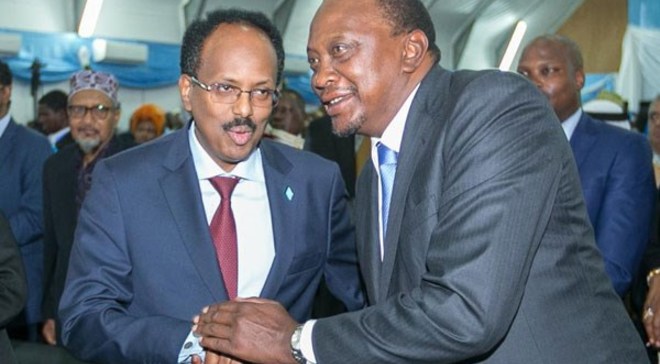 Kenya and Somalia have been embroiled in squabbles over tensions in the border town of Balad-Hawo, which saw thousands displaced. Troops from Somalia National Army [SNA] and Jubaland forces engaged in a fierce gunfight to Kenya's displeasure.

In a letter dated March 13th, Kenya regretted the cancellation saying, "Due to unavoidable intervening circumstances, it will not be possible for Kenya-Somalia-Ethiopia tripartite summit to take place."

Both parties had settled for Monday, March 16th as the appropriate date for the summit. President Uhuru Kenyatta was set to be the host, while Dr. Ahmed is believed to have taken mediation roles.

Despite the last-minute cancellation, the ministry added, an appropriate date shall be set in the future for robust discussions about cross-border crisis and security situation in Somalia.

"The ministry regrets any inconvenience caused and assures the esteemed embassy that new dates will be proposed in due course," read the letter in part.

Somalia partners had raised concerns about the presence of SNA troops in Gedo, calling for "immediate reduction" to pave way for "dialogue" between FGS and federal states.

Jubaland President Ahmed Madobe had accused Farmajo of "plot to establish a parallel administration in Gedo" a move he said was aimed as "neutralizing" his government. Somalia accused Kenya of "protecting" Jubaland leadership contrary to "international law".

Sources within Kenya's interior department also indicated that the summit was also meant to persuade Somalia to withdraw the Indian Ocean maritime dispute from the International Court of Justice. The case will kick off in June this year, ICJ confirmed.

While authorities did not immediately reveal the reason behind the surprise cancellation, Kenya had, however, banned all public gatherings and meetings due to coronavirus pandemic.

On Friday, a 27-year-old lady tested positive for the virus and she's currently quarantined in the capital, Nairobi. She had traveled from the US via London early this month, officials said.

The case was the first to be recorded in East Africa. Over 100,000 have been diagnosed with the virus worldwide since December. Of those, 5,000 have since died. It emanated from Wuhan city in China.

Shortly after Kenya's confirmation, Ethiopia also confirmed another positive case, a move that could have precipitated to the cancellation of the summit.

"Ethiopia has declared its first COVID19 case. I urge all to remain calm and take preventive measures in line with WHO and @FMoHealth guidelines," Dr. Abiy said in a tweet on Friday.

Kenya uses Jubaland as a buffer zone in the fight against Al-Shabaab, a reason it works closely with Sheikh Madobe's regional administration. Jubaland troops moved to Mandera throughout the clashes with SNA, reports indicated.

There is a concern that continued wrangles between FGS and federal states could pave way for Al-Shabaab resurgence, a reason why Kenya is keen to quell tensions in Gedo.

And in what could further complicate the situation, Ethiopian National Defense Forces [ENDF] work with FGS, a move that places it at opposing ends with Kenya, thus the need for the summit.