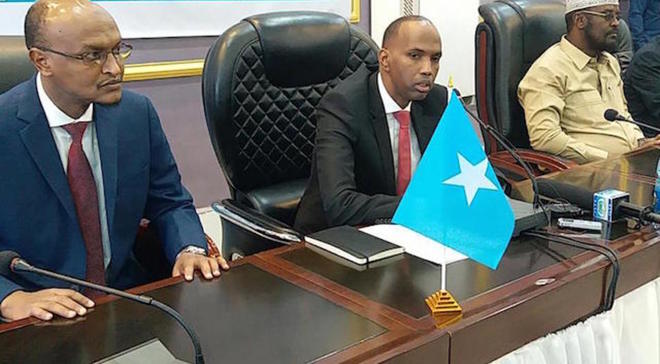 MOGADISHU, Somalia - The Federal member states of Somalia issued a stern warning to the central government in Mogadishu days after a truck bomb has killed 358 in Mogadishu, Garowe Online reports.

The cooperation council of the regional administrations released on Saturday, Oct 21 a statement discussing the current situation in the country, and the Somalia’s deadliest ever Mogadishu attack.

The regional leaders blamed the Somali Federal government for security failure and slow in responding to the Oct 14 Zoobe tragic, where hundreds of innocent civilians were massacred by the terrorists.

The Council spoke the government's intervention in the Federal states' internal affairs and diverting the budgetary funds for the administrations to politically related issues aimed to oust some regional leaders.

The leaders have warned the Federal government led by President Farmajo against the plan to remove the Presidents of Galmudug and Southwest States from power, according to the statement obtained by GO.

Meanwhile, the Security Ministers of Somalia's regional administrations have boycotted to attend a UNSOM hosted security forum expected to kick off in Mogadishu, with the presence of PM Khaire.

GO has learned, citing reliable sources that the meeting was postponed to undated period as the wrangle between the central government and its Federal member states continues to build up.

The delay of the round-table is a setback to the fight against Al Shabaab, the sources added.

This is the second time that the government fails to hold a key conference due to the current political tension in the country. The States previously rejected to attend constitutional review meeting.

Early this month, the leaders held talks in Kismayo, in which they issued a joint communiqué criticizing the government's policy towards the Federal affairs, a move that deepened the worsening relations.

The standoff was fuelled by the agenda of Fahad Yasin, the chief of staff of Villa Somalia, the Presidential Palace who was reported to be working a plan to change the leadership of some Federal states.

Yasin, who is a former Al Jazeera Arabic journalist has been accused of having close links to Qatar.

He wrote an article on the Federal system in Somalia in 2014, recommending the Federal states to be systematically eliminated, using funds from some Arab countries which are allies to the country.

Qatar Foreign Minister, Mohamed Abdirahman Al-Thani has politicized the recent truck bombing at K5 junction in Mogadishu, saying it was aimed to target Qatar diplomatic mission in the capital.

The attack on #Qatar diplomatic mission in Mogadishu will not deter our support for #Somalia's democracy, security and stability.

"The attack on Qatar diplomatic mission in Mogadishu will not deter our support for Somalia's democracy, security, and stability," said Al Thani in a statement he posted on his Twitter on Oct 16.

Al Thani's statement seems to be blaming the Saudi-led Gulf nations which cut ties with Doha for the responsibility for the attack in Mogadishu that left 358 Somalis dead.