Somalia: FGS accused of pushing for “fake charges” against journalist 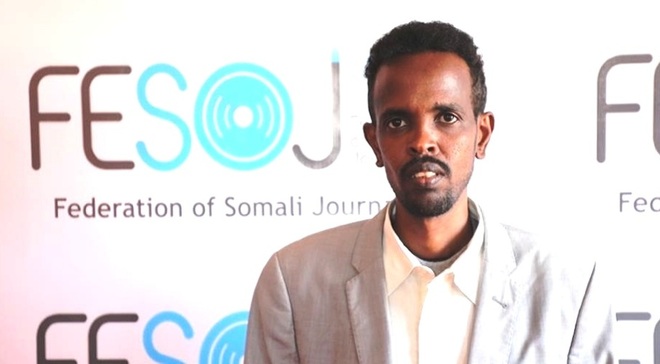 MOGADISHU, Somalia – The Federal Government of Somalia [FGS] is now facing accusations of pushing for fabricated charges against a local radio editor in Mogadishu amid a worrying rise in journalists being arrested for exercising their journalistic work, Garowe Online reports.

Abdiaziz Ahmed Gurbiye, the chief editor and deputy director of the Mogadishu-based independent Goobjoog Media Group appeared in court on Tuesday, but the hearing of his case has adjourned to undefine date.

The Attorney General's office, taking orders from Villa Somalia has convicted the journalist of insulting a political, administrative or judicial body, and publication of false news about the Covid-19 response.

Speaking at the opening of the trail, Gurbiye has dismissed all the charges against him as “baseless”.

In a press conference, lawyers defending the reporter described the AG's claims “unlawful”, arguing that the court had no legal jurisdictions to proceed with the case under the outdated media law in Somalia.

They have said the charges violate the article 18 of Somalia’s provisional constitution, which surely guarantees the freedom of speech and the independent media in the long-chaotic Horn of Africa nation.

“We challenged the charges against Abdiaziz Gurbiye. He could not be convicted, referring the criminal law under Somalia’s Penal Code’s 29 article,” said the journalist’s lawyers, Dahir Mohamed [Arab].

“This is evidence of how the Villa Somalia staff including Abdinur Mohamed Ahmed, the Director of Communications for the presidency are interfering & pressuring baseless charges against journalist Gurbiye. We strongly condemn ongoing threats directly from Farmajo’s office and we call these to stop,” said SJS.

“We urge the court to dismiss these charges against Abdiaziz Ahmed Gurbiye because, from the legal viewpoint, the case is completely inadmissible," Mohamed Ibrahim Moalimuu the Secretary-general of FESOJ told journalists at a press release after the adjournment of the trial was announced.

The Human Rights Watch has on Monday called on Somali authorities to immediately drop the charges against Abdiaziz and make clear that critical commentary is a welcome element of a democratic society.

Somalia is categorized as one of the most dangerous countries in the world for journalists, as they face threats from authorities, armed private individuals, and the al-Shabab terrorist group. In its latest World Press Freedom Index, Reporters Without Borders ranked Somalia 163 out of 180 nations.

So far, the first half of this year, at least 20 Somai journalists arrested and several media houses shut down across the country that was beset by three decades of conflict, piracy, and terrorism.