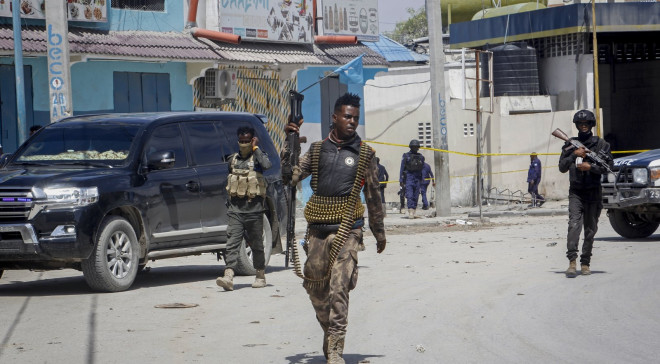 Security forces patrol at the scene, after gunmen stormed a hotel in the capital Mogadishu, Somalia, Aug. 21, 2022. (AP Photo)

A senior militant leader of terrorist group al-Shabab has been killed and civilian hostages set free, according to a statement by Somalian authorities on Saturday.

The Somali National Army (SNA) conducted the military operation, killing al-Qaida-affiliated al-Shahab terrorist leader Carab, known by his short name, and wounding Osman Daud and Aw Maay, the other senior members of the terrorist organization, according to Daud Aways, the minister for Information, Culture, and Tourism.

The operation was carried out by an elite military unit of the SNA in the al-Shabab-controlled town of Mubarak, located 95 kilometers (59 miles) southwest of Mogadishu, according to a statement issued by his ministry.

"Special forces of the Somali national army (SNA) have destroyed al-Shabab's financial center in Mubarak area of Lower Shabelle region of Southwest State of Somalia, killing the leader of al-Shabab in the area and wounding nearly a dozen," the statement said.

During the operation, it freed several civilians who were being held by al-Shabab in the center, it added.

Residents in Mubarak, where the operation took place, told Anadolu Agency (AA) that several civilians were killed and more than a dozen others were injured during the airstrike.

They were taken to hospitals in Mogadishu for treatment, they added.

The Somali government has not responded to the claim of an airstrike.

While al-Shabab claimed on its propaganda website that the airstrike in Mubarak late Friday killed at least 10 people and injured 20 more.

Since U.S. President Joe Biden authorized the redeployment of U.S. troops in Somalia, the country has seen an increase in airstrikes against al-Shabab terrorists, most recently in the Hiran region, which killed more than 14 terrorists.

Somalia has been grappling with increasing insecurity for years, with al-Shabab being one of the main threats in the Horn of Africa country.

Since at least 2007, al-Shabab has waged a deadly campaign against the Somali government and international forces that have claimed thousands of lives.

The United Nations has also warned of growing insecurity in Somalia, detailing attacks by al-Shabab and pro-Daesh groups in its annual report this year.