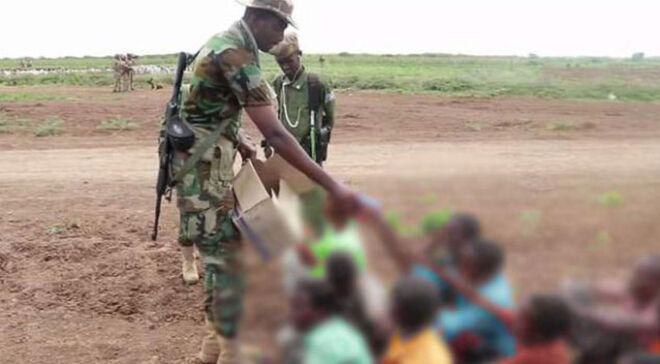 MOGADISHU, Somalia - Several Al-Shabaab militants were on Friday killed in the fragile Lower Shabelle, state media reported in the ongoing operations targeting the Al-Qaida linked group which has terrorized security forces, civilians, and even members of the public in Somalia for decades.

According to state-run media, the Somali National Army killed 16 Al-Shabaab militants in Barire, further stamping authority in the country, which has been struggling with insecurity for the last couple of years, leaving hundreds of people dead and others critically injured.

Reports indicate that the army was trying to rescue children from a training camp who were captured and forced into the terrorist group. SNA troops opened fire and killed the militants as others ran for their safety, according to security forces.

"The children were kidnapped and detained in a camp which was designed to convert them into child soldiers," said a senior Somali military official who spoke to Garowe Online via phone from the region on condition of anonymity.

He added that the government troops launched the raid to set free the children after receiving credible information on the location of the terrorist camp and the activities that were going on for a while.

There has been no comment from Al-Shabaab on the government claim.

Currently, there are close to 7,000 active fighters in Somalia according to a report released by the United Nations. Most of these fighters are located in Central and Southern Somalia, after having deserted towns following sustained attacks against them by the security forces.

Last week, the SNA team had announced victory against the militants in Lower Shebelle, after several operations mainly waged by the Danab forces, African Union troops, and the US Africa Command. The troops had secured several towns from the militants.

One of the major towns which were liberated from the militants was Janaale and agricultural-rich town which fell to security forces in March 2020. The town, which is located in Lower Shebelle, was a major source of income to Al-Shabaab, which had imposed the forceful Zakat.

Elsewhere, the SNA troops clashed with the Kenya Defense Forces [KDF] in Balad-Hawo town on Saturday, reports. The town is found in the porous Kenya-Somalia border and has lately between witnessing clashes involving the two army and regional Jubaland security forces.

Reports indicate that fighting broke out between the two military teams when KDF allegedly opened fire against residents who were protesting against the alleged abduction of civilians by the Kenya military which is stationed in Mandera, a neighboring town near the Gedo region.

Clashes between the two teams are synonymous given that this is the third time since January they are fighting. Previously, the Somali military accused their Kenyan counterparts of encroachment besides supporting the regional Jubaland security team.