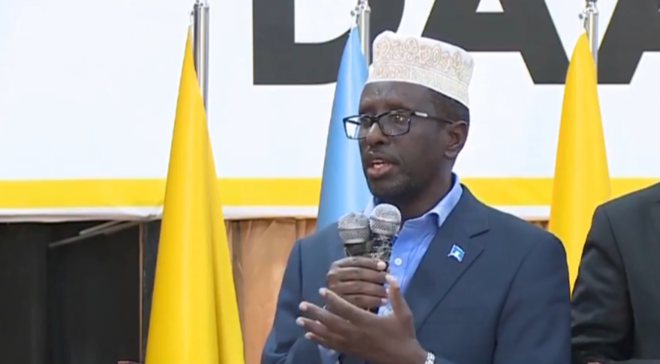 The move followed amid rising travel restrictions imposed on Jubaland after the state parliament has re-elected Ahmed Madobe for the third term in office last month in an election that Mogadishu rejected.

Just hours before the incident, Somalia’s Civil Aviation Authority (SCAA) issued an order for any airline flying to Kismayo to seek permission from the Agency's office for a flight 24 hours in advance.

Somali Government and Mogadishu airport officials provided no explanation for why the former leader has been refused to allow boarding the plane departing to Jubaland’s interim administrative capital.

Ahmed who served as President of the former Transitional Federal Government between 2009 and 2012 was denied access to travel to Kismayo for Madobe’s inauguration which is set for 26th September 2019.

Relations between Jubaland and the Federal Government of Somalia in Mogadishu have been souring since 2017 and reached at the “lowest point” following the re-election of Madobe on 22 August 2019.

These latest economic sanctions come hot on the heels of a previous ban on direct flights from Nairobi to Kismayo slapped on Jubaland with abrupt effect by the Mogadishu-based UN-backed Government.

Early this month, Madobe said the government has refused to sit with Jubaland to amicably resolve any dispute and blamed it for arresting his security minister Abdirashid Janan while transiting in Mogadishu.

Hassan Sheikh Mohamud, ex-Somali President, the successor of Ahmed said "Somalia has been waiting almost 30 years to take control of its airspace. It’s a sad situation the government uses the management of the air space as a political weapon that can have a serious ramification on the political stability and the unity of the country."

Mohamud advised the government to think twice and reverse the current course of action.