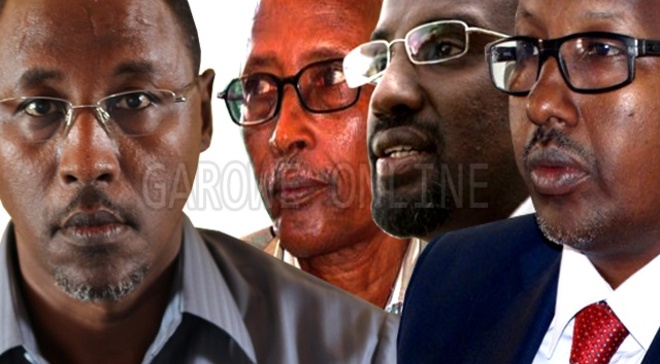 At least ten politicians have announced that they will enter the race amid heated debate over the very map of the federal state in central Somalia; however Garowe Online has taken a closer look at four front-runners.

Gulled was awarded with ministerial post in 2012 after President Hassan Sheikh Mohamud emerged victorious in indirect elections held in war-torn Mogadishu for the first time in over two decades.

He is an eminent member of the country’s influential cabal, the New Blood [Damuljadid] to which Somalia’s President himself belongs.

Gulled took on a post with former Prime Minister Abdi Farah Shirdon’s government as Minister of Interior. In the next government headed by Prime Minister Sharmarke’s predecessor, he became Minister for National Security but he resigned over incompetence in mid-2014 following wave of Al Shabaab attacks, largely in the capital Mogadishu.

Many government officials were killed in what appeared apparently coordinated terror attacks on key structures including the heavily fortified compound, Villa Somalia.

Gulled is held up as a likely winner due to his ties with President Mohamud who allegedly backed him with cash for his campaign.

Information obtained by Garowe Online reveals that he received an amount put at USD 3 million from Mohamud.

Adan is the Somali ambassador to Ethiopia. He enjoys the strong backing of neighboring countries with Ethiopia at the forefront and some clans.

He returned a few months ago to solidify his support in central Somalia. If elected, he wants to talk to the paramilitary group of Ahlu Sunna Wal Jamea in dialogue.

The Somali envoy to Ethiopia was firstly sighted in political landscape in 2007 as he served as Deputy Prime Minister and Information Minister under the incumbency of former Transitional Federal Government President Abdullahi Yusuf Ahmed.

It is yet unclear: who was behind his candidacy? Yet sources say, he could be relying on the support of Ahmed.

It is worth pointing out that he blew a lot of money on the construction of Galmudug parliament house.

Qaybdid is former President of Galmudug administration. He remains deeply notorious for his role in the country’s bloodiest internal strife following the toppling of the country’s long standing military regime by a coalition of armed groups in 1991.

He has been cool to Mogadishu-based Federal Government and neighboring countries. Fewer clans threw their support behind him.